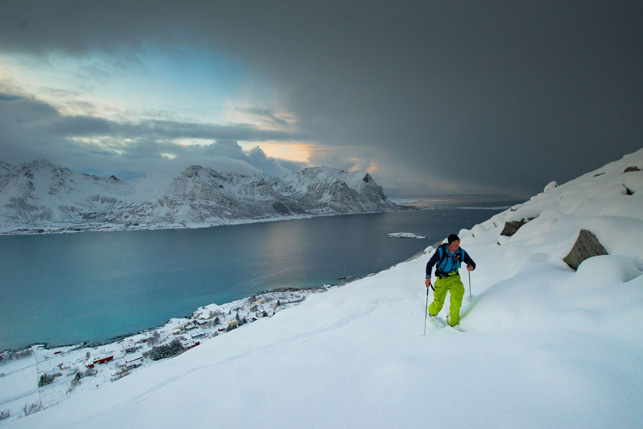 Winter is fast approaching once again, the mountains are getting their winter coat on and we our winter stoke.

So what has McNab Snowboarding got in line for the winter ahead?

Once again I’m very excited about the up and coming season. We’ve made a few major personal changes to our lives this summer and have moved our HQ from our long time home in the mountains of Chamonix all the way across France to Biarritz on the West Coast for the Surf and the easy going Surf lifestyle.

I’ve pretty much Surfed everyday and not worn shoes since the move!

In recent years I’ve been trying to travel to new Snowboarding destinations (and flexibility is a key ingredient of my future Snowboard course aspirations) so having a permanent base location in the Alps has become less of a necessity. That and the fact that I just want to be either Snowboarding or Surfing everyday kind of swayed it for me. Ruth was quite happy to move somewhere were it was warm, she didn’t have to shovel snow, wear shoes anymore and with surfing as a bonus both her and the girls were easily sold on the idea.

And so McNab Snowboarding HQ can now be found in by the beach in Biarritz – expect Surf, Yoga and Beach Lifestyle camps to follow!

OK, back to the Winter…

As usual, I’ll kick off the Winter with a Pre season Shred session in Tignes in mid December. A mixture of Tech tuition, Freeride coaching, Slackcountry shredding and Splitboard exploring all crammed into a week of riding that sets things up for the season ahead.

I’ll be back in the Sea for Christmas and New year and then in early Jan I’ll be running my first BC Voyager trip to Hokkaido, Japan, where it is already dumping!

Hokkaido is rapidly becoming known as the Powder Capital of the world and is the centre Royale for the New era of Surfing mountains! #ilovesurfingmountains and so getting this on the calendar was a must!

The Japan Plan is flexible, we will lodge in two different areas over a 10 day period and hit up as many of the different areas that we can. I last went to Japan in 98 for the Nagano Olympics when Snowboarding was a test event but didn’t get to explore its potential or visit the North Island and so I’m very excited about this trip.

After Japan, I have more exploring to do!

With a new mountain range right on our new doorstep, I am excited to announce that some of this seasons courses are moving from the Alps to the Pyrenees.

The Pyrenees are very different to the Alps in that they are much less populated, feel a little wilder, narrower, often Steeper and less developed. The resorts are smaller and further apart and in-between the resorts there is an abundance of incredible looking terrain with pretty much nothing in it. I haven’t Snowboarded here before, but from what I’ve been able to find out it seems like there is a secret oasis for Backcountry Splitboarding right on my doorstep!

After the Pyrenees I’ll move camp back up to Chamonix for some more traditional Backcountry riding amongst terrain that I know so well. It will be nice to visit the Mont Blanc Massif as a non resident visiter, meet friends, explore the peaks once again and ride my old favourite haunts.

As March closes out, I should just have time to catch a few waves before an early Spring Shred back in the Pyrenees, this time exploring the large Spanish resort of Baquiera and the beautiful Val d’Aran.

April will see me head back into the thick of Winter with my BC Voyager trip to Lofoten in the frozen North of Norway. Lofoten has become a firm favourite destination of mine over recent years.

I can’t really imagine not wanting to go riding there to be honest! Lofoten is so beautiful and for those with the mind to Split and Surf the potential is endless with white peaks contrasted above the dark fjords.

Straight after Lofoten, I’ll transfer over the boarder to Sweden for my Arctic Split and Heli trip in Riksgransen. Last years Riksgransen trip made my winter! After a hard snow season in the Alps I didn’t really expect cold fresh winter snow and freezing temps and was pleasantly surprised day after day.

I also got to ride my dream run from the Heli which helped seal the deal and made the repost for this winter a necessity. Riksgransen is rapidly becoming Europes number one Heli destination, but keep it quiet… mums the word!

Back home for a few more waves and then I’ll make my way back up to Chamonix for my demanding BC Summits course. Here with the longer days of Spring we’ll tour and climb amongst the highest peaks of Europe, stay in mountain refuges and maybe if things go well even ride from the Summit of the mighty Mont Blanc itself.

What a great way to finish off the Winter this would be!

So this is my plan for the Winter. I hope that you’ll find it as exciting as I do and come and join me on my adventures.

I look forward to riding and exploring with you one day soon!

The Art of the Arc part 3 – Where mind surfing mountain becomes a reality.

Where Mind surfing mountains becomes a reality! So you’ve got a deeper understanding of how…

Educating myself on a changing climate with POW UK

As a Mountain Sports professional with 30 years in the high mountains behind me, I…