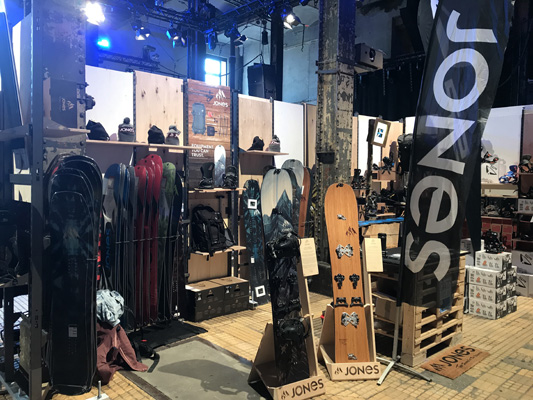 Halfway through October already!! I know this because its Loren’s 11th Birthday mid October and she’s been counting it down day by day and getting us prepped for it for months. My 50th follows shortly after and although age doesn’t bother me, so long as it doesn’t stop me from doing the things I want to do, I am generally less enthusiastic about birthdays than Lol.

A short while ago I visited the beautiful city of Vienna to give a BC safety presentation at the Bluetomato Snowvention show for Jones Snowboards. Summer and Autumn kind of roll along together for quite a while down here on the West Coast of France, so although our thoughts turn to organising the winter courses and the thought of dropping into some cold fresh turns gets us excited, on a daily basis we’re more likely to be looking at Swell forecasts, tides and surf cams, so it was quite a shock to drop into the Winter Snowboard scene complete with an inner city Jib event and all the new products for the coming winter on show.

It’s always great top see all the Jones kit displayed in the one place, like a virtual dip into the catalogue or the website where you can get a real feel for all the latest products, feel the flex and weight of the new boards, try on the new packs and check out the new binding…

So, number one on my list is of course the new Mind Expander in 162! Surprisingly, even for me, last season I spent most of my time riding the 158 version of this camber less board. A board that by all rights is both too soft and too short for a rider of my size and destructive ability. Having spent the last year surfing everyday however, I felt quite in tune with this board from the get go and always came back to it after strays onto the other, seemingly more suitable, weapons in the range. Although I rode it all season, I did have to temper back my expectations of what I could do with it at times and what speed I could ride and expect to survive. I loved the feel of the board, loved the tail and the nose, but always felt it was lacking length, a little stiffness and maybe some camber. Well, what do you know?

The Mind Ex is back in a 162, now with more carbon and oh yes, slightly stiffer!

And for those in the know! there’s an Ultra camber version coming in the not to distant future…!

So having got very excited about this, I then came across the Storm chaser, now in 160!!!

My quiver is complete, If only the Mind Ex came in a Split?

Well, hell yeah! Now it does!! Shame its not in the 162 Jez, but us big guys will manage just fine!

I am so excited that the next time I split up a peak I’ll have this board under my feet for the ride back down.

Ok, so that’s boards sorted, I’m sure there are improvements to other boards in the range, but to be honest I stopped looking right there.

The New Jones Pow surf, also designed by Chris Christenson is a vast improvement on the previous model. If you’ve not pow surfed before, there is no finer feeling on snow! Transform a snowy walk with the dog into an urban surf safari or even explore and ride the Backcountry in the purest form!

Just don’t lose it in the snow! The board is white!

Next up are the new bindings. I’ve been riding the NOW skate tech binding system for a good number of years now and the new Jones Binding is a development of the NOW O Drive that I’ve been using the past couple of seasons. I absolutely love this binding, the high back is sooo good for me with my long legs, the first binding to give me the perfect support for cranking the turns that I love.

Sometimes I feel NOW bindings have limited their appeal by selling themselves a skate tech bindings, because, I mean, Who wants their binding wobbling around like a set of loose trucks, when you’re mach 10 in a straight line out of there?

Well in fact, the binding is super solid, you’re foot doesn’t actually lift or move as the base plate, and your foot stays flat, the only thing that does move, and minutely at that, is the hanger around your foot and in actual fact this slight movement increases the pressure that you can push and now ‘pull’ onto your edge, limits vibration and creates a super smooth, incredibly comfy and powerful ride.

Jeremy J has been riding and putting his name to these bindings for years and so its a nice development for this technology to be developed into a couple of models of Jones Binders, the Apollo and the Mercury and I can’t wait to get on a set of the Apollo.

The Backpack range has been redesigned and tidied up, a lot less dangly straps hanging out there which is great. The DSCNT 32 brings everything you need and nothing you don’t to the BC daypack table with some nice new features, whilst the 25L looks good for the Slackcountry adventurer.

Last year I received the new Jones Expedition Board bag which I have now used extensively. It still looks like new and is the best board bag I’ve come across so far.

So what else is new?

There’s a new set of hiking poles with clamp adjustments. Simple to use, a very effective and reliable system which has obviously come about after many frustrating days out in the cold messing around with unreliable systems!

The poles come in both an alloy and a Carbon version and of course, with skins, BC safety kit, packs and poles, you have a one stop shop now for all your splitboarding needs!

I think that was about it for the Jones Kit that I salivated over.

I also got a quick look at the new Salomon Splitboarting boot which I have posted a photo of. I’ve always been super impressed with the Salomon Lab series kit as it seems to be well thought out and cutting edge, so I was quite excited to see this new boot.

My first impression on picking it up was that it was slightly heavier than I expected!

The system seems pretty good and its great to see a splitboard boot retaining the soft boot, not mountaineering boot, cut, shape and feel.

I love that they haven’t gone to a hard vibrate sole with this boot, like many of the other “BC” boots have adopted and the customised fit and hiking flex system is great.

Salomon have always been on point with their snowboard boot design and so I thought however, that after following the development of everything else in the S Lab series, that this boot might be a little bit further on in terms of taking us towards the ultimate future of Splitboard boots.

Maybe I expected too much and this is great step, I love the welded rather than stitched outer, but come on Salomon, how about dropping the weight, the volume, lowering the profile and making a boot that’s actually foot shaped?

It still surprises me how much volume and how much of a club foot profile Snowboard boots still have after all these years. Mountaineering boots and Ski Randonee boots have halved their profiles and volumes in recent years whilst still retaining warmth and increasing performance levels.

I look forward to the future when Snowboard boots are foot shaped with a lower profile that transmits pressure and movement through a binding that is specifically designed for that boot!

A barefoot style Snowboard boot? Any takers? Give me a shout and lets get on it? We can start there and lets see where we end up?

In the mean time, check out the Jones Snowboards website and get frothing on the kit and where its going to take you!

Do you need Splitboard Boots? The big Question…