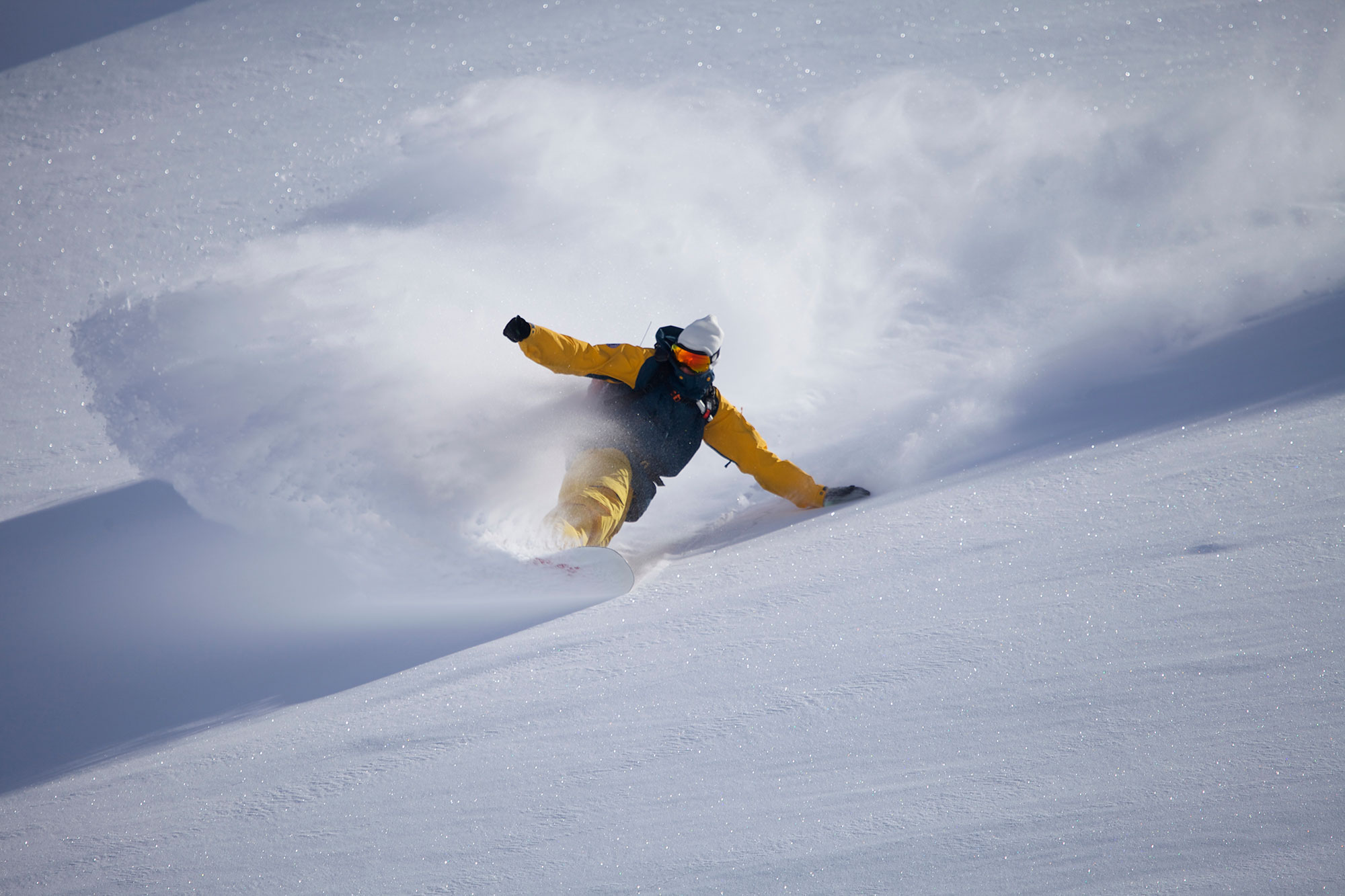 What can I say…Kamchatka rocks!!!

What a great way to finish off another epic winter season, Heli boarding in the Kam…It had been 5 years since I last went and I’d kind of forgotten how good it is.

Imagine your best run of the winter, that one epic run, a mountain of untouched fresh, terrain that blows you mind, windlips to shred, drops to fly off, steep narrow chutes and couloirs and deep fresh turns until your thighs explode…imagine that one best run, now imagine it a little bit longer and faster and then imagine the creme de la creme, there’s a heli waiting at the bottom and as soon as you arrive it’ll whisk you back up so that you can do it all over again…and again…and again…but only each time you repeat it its totally fresh again and the terrain has somehow just gotten better and better…Yeah, for me that is best how to describe Heli boarding in the Kam…There is no finer way to shred the best lines and to push your riding to the next level…

A fine end then, to another amazing winter…and what a winter season it has been!

Early December I kicked things off with a couple of Days Splitboarding with, firstly Mr Jeremy Jones and then did some pre work splitting and riding with Ruth here in Cham.

I quickly followed this up with some work…a couple of pre season courses in Tignes, first an early season Freeride Tech clinic and then a Slackcountry Splitboard course.

There’s some great terrain over in Tignes, perfect for Slackcountry outings and the Split addition really opens the doors as to where you can go and what you can get up to without straying to far a field. I’ll definitely repeat these two early season courses next season.

The Freeride Tech clinic is also the perfect way to kick off your winter as it gets you back on the board and riding and thinking through your feet. Your technique is then on a progression for the rest of the winter. Also if it snows I quickly turn this course into an Off Piste powder shred fest (as I do with most courses as my regulars will attest to).

I had a bit of family time over Christmas and then had a 4 day Freeride over the New Year week, which was quite quiet here in chamonix but with great snow, so it made for a fantastic way to bring in the new year with some uncontested Powder shredding right off the lifts.

As most Freeride/BC enthusiasts will have gathered early on this winter, the Snowpack out the back became quickly unstable due to an extended cold dry period on a shallow base. This caused a Crystallised weak layer to form and caused unpredictable deep layer Slab avalanches to release right through until mid to late Feb. As such I tamed down much of my early season touring, as did most guides, and concentrated on the zones i considered super safe but also super good. Fortunately during this period I had programmed in lots of Freeride and Slackcountry courses and with abundant snowfall every week the riding was epic.

I have very fond memories of one week in particular when the riding could only be described as freefalling through feathers. All the steep lines in Courmayeur filled in so much you could pretty much ride off anything and take the freefall elevator straight down into a deep bed of feather like pillows…Pretty epic riding for sure.

Towards the end of Feb I headed off to Krygyzstan for the first of my winter trips. An epic journey spread out over 2 days brought us to the foot of the Tian Shan mountains at the eastern end of Lake Issyk Kul. From here we’d hike into the mountains for a week of Yurt based Splitboard shredding and another epic adventure.

The trip was great, the terrain is fantastic and there’s truly no one else out there. We had perfect weather and hiked everyday and scored and rode amazing lines all week.

3 hours hiking is de rigger but the landscape and the atmosphere makes the hike up as much a part of the day as the ride down. Aprt from epic riding, my lasting impressions of Krygyzstan are of a silence I’ve never before experienced and a night sky that you wouldn’t believe!

After a 2 day journey back to Cham I boarded a flight the very next day and headed off to join Ruth and the girls for a quick Surf break in Feurta Ventura.

After a week in the waves I came back to Chamonix fired up to get back on the mountain and keep that surfing feeling going on the snow. I now entered a month of Advanced and Tailor made courses, heading straight into a very successful Steeps week, another Slackcountry, an advanced Splitboard week and to finish off a Heli Peaks to Powder week!

The Steeps course is a course I’ve been toying with for a while. A couple of years ago I ran one with a ratio of 3 to 1 and we did some epic riding and some gnarly lines in steep terrain but I found it quite stressful looking after 3 people on steep exposed lines on my own (as often as a guide on steep terrain you have to be in 2 places at once, For example at the top of a rappel into a steep exposed face to make sure everyone is tied on and ready, but also you need to be at the end of the rope on the face in order to look after people once they commit and come off the rope). As such, this time I brought the ratio down to 2 to 1 and added a 2nd guide (my mate Simon or Brad Wiggins as he is sometime known) and with a group of 4 client and 2 guides we we’re sorted.

conditions were tough, the steep faces were all quite firm so the feeling of exposure was at a max. We rode some epic lines, some of which I’ve either never ridden or not ridden for years. Stand out moments were the Steep exposed Marbree, dropping the North couloir on the Aig Belvedere and sawing through a cornice to access a steep line on the North face of Mont Fortain all of which were fantastic. The team loved the week and have requested a repeat next season, so I’ll probably end up putting 2 of these courses on next year and Chamonix is so full of epic steep lines that repeating these courses year after year will still give you endless new lines to ride… I’m already excited at the possibilities!!

To top of my season in Chamonix we had the Heli Peaks to Powder course. Another 2 to 1 ratio with 4 clients and Wiggins as 2nd guide saw a Gran Paradiso summit as a starter after which we took on the Heli access theme to score some great days high in the mountains, two stand out moments for me being the hike and ride over on the far side of the Saleina Glacier and a hidden couloir off the Pin d’arolla which I had never ridden (but had the beta for) and which worked out to be amazing and a line I’ll definitely look to repeat in the future.

Soon after this I once again boarded a flight for Moscow and began the epic journey to Kamchatka for some of (if not) the best riding I’ve ever done. I felt my riding move up a notch day by day and with a great crew riding out there the stoke for bigger and better lines was on everyday every run. We scored some amazing lines, some never before ridden, and finished up with a score of some 39,000m and 41 drops.

Whilst there we rode in a superb valley surrounded by high sharp peaks (aptly named the sharp mountains) which were just full of amazing steep and narrow couloirs non accessible by Heli (as there’s no landing site) which has given me the idea for a Heli/BC expedition trip were we’d Heli for a few days, drop into this valley and camp and hike for a few days and then Heli again…

Sounds pretty good to me, even better if I can get in a straight Heli access course there first…

I pondered over the possibilities and recapped on the season on the flights home before heading straight off for a 2 week surf trip again in Feurta.

So now I’m back home in Chamonix looking forward to an active summer season of biking, climbing, Mtn guiding and some more surfing, whilst all the time thinking about next seasons courses and how the hell I’m going to fit everything in and where to go?

I’m thinking Kashmir again in Feb, Lyngen would be good again but Kamchatka is calling and Greenland is always out there…

So much to do, so many possibilities and so many places I’d like to ride…

I guess its not a bad problem to have…

Hope you enjoyed it as much as I did…

Check out this video edit of Mikey and Jim, from one of last season BC…

Slackcountry or BC Intro question?

Hi, just wondered if you could give me a little advice between the slack country…