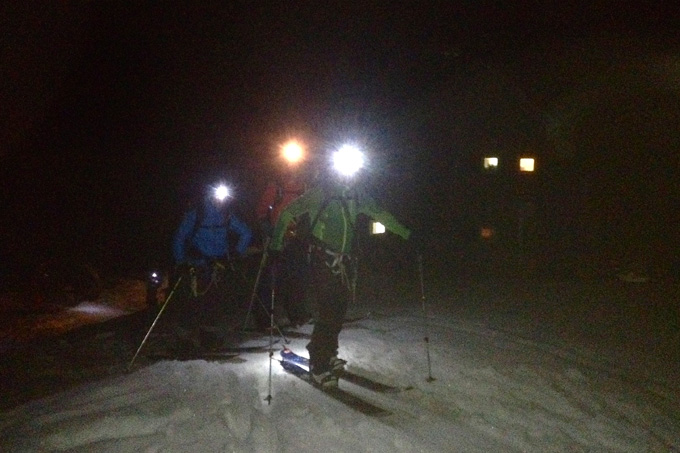 There’s something really special about those cold crisp early morning starts…Although it’s cold, way to early and dark, once you’re up and the decision has been made to get on with it, there’s an exciting optimism about the day ahead.

Breakfast in a high mountain refuge can’t be glorified. You wake to darkness in a stuffy dorm and search in the darkness for your head torch and kit, the essentials which you’ve hopefully stashed in close proximity to you so that you can spend an extra few minutes in bed in the dark whilst starting to get dressed. I’ve become quite adept at getting ready quietly in the dark, careful not to wake those around me as I get dressed and grab kit with out the need to switch on my head torch.

Once I’m out of the dorm I switch on and sort myself out. There’s not normally much sorting to do as everything has been prepped the night before. I’ll then head outside quickly to check on the weather and to see if its a go or not. I’ll also check the temps to get an idea of what I’ll need to wear in terms of layers.

Next I head down to breakfast and start to load up with fluid and carbs. Breakfast is pretty basic, orange juice, stale bread and jam and hot chocolate or coffee. You probably loaded up with Pasta the night before, which as it happens is only a few hours ago anyway, and so you don’t really need to eat that much, its really just a waking up ritual. I sometimes bring something up from the valley and keep it for the morning, it’s a nice touch to pull out a delicious croissant almond when everyone else is tucking into dried stale bread.

After Breakfast its time to gear up, pop outside to check the temps again and make final preps. Harness’s go on, boots are on and head torches are switched on. I’ll try to be ready early so I can help with kit and will chuck on a duvet jkt to keep warm whilst I wait for departure. Once every one is ready and kitted up we’ll do a kit check, I look at harness’s and check transceivers. I chuck my duvet back in the bag, ‘layers on before you get cold, layers off before you get hot!’ and we’re off.

settling into the rhythm that will keep you going for the next 6 hours!

Early starts equal big days! You’re not normally setting off in the dark unless you’ve a big day ahead and so you need to set a pace you can hold for a couple of hours with out getting uncomfortable. We’ll have a faff stop within the first 15 minutes as people get hot or realise they’ve not got something they need and then we’ll grab a drink after about an hour or so. We’ll make a short stop for a regroup and a bite to eat after the first 2 hours and then we’ll push on until first light.

first stop as daylight draws in…

It’s a beautify thing to watch the day draw in, the darkness fades out of the sky as if drawn from one horizon to the other, the surrounding peaks start to glow and then shine as the first rays of the new day hit them. It’ll be a while until you stand in the sun and this is the coldest part of the day so you don’t want to stop for long, just enough time to take it all in, grab a photo and turn off your head torch.

the surrounding peaks pick up the early morning sunlight

You can now see the mountain ahead of you and it’s probably the first time you’ll get an impression of how big it is and how far you have yet to go. It’s a timeless period, the day hasn’t really begun but the night is leaving, it’s like you cheated and sneaked out to get a head start on the day and now here you are high on the mountain as the first rays start to light up the slopes above. You’ll stop in the sun soon and regroup before the final push on to the summit.

Quickly you chuck on the duvet jkt, eat and drink, stash your head torch, it’s done it job, and now is the time to get technical equipment close at hand. Your ice axe which has been on your pack up until now is moved into a quick draw location stashed under your shoulder strap, crampons are near the top of your pack and ski crampons are at the ready. At some point between now and the summit it is likely that you’re board will also go on your pack so you need to have a plan of attack for this scenario and know whether or not you’ll load it as two halves or prep it as a board ready for the ride down.

the summit draws closer with every step, Liam at 4000m

After this sunrise stop it’ll probably be about an hour and a half to 2 hours to the summit. Very often now you can see the top and for the next hour it’ll not look to get any closer. With half an hour to go however, it will suddenly feel within reach and you’ll get an extra boost as the excitement builds.

yes Liam, you can use it now…

Gaining the summit is often quite technical, things often steepen up and get narrower and more exposed the higher you get. Before you stand on the top you’ll most likely have to don crampons and get your axe out, if you’re not already roped up now you’ll tie on and either stick your board on your back or leave it somewhere safe for an aller/retour summit dash.

things often get steeper and more technical as you near the summit,  final approach having dumped kit below.

Depending on the time scale, the terrain and the weather, you can maybe drop your pack here as well and so can travel light to the top with your just your camera and a few essentials.

the glory shot and a perfect day…we’re now half way!

It’s probably or hopefully still very early as you make your final steps onto the summit. If it’s not to windy you can stop on the top and check out the view. You’ll be able to see for miles and the high peaks will stretch out in every direction, now basking in the glorious glow of the new day. You grab a few photos and enjoy the moment. You’ve been on the move for 6 hours or so but with a nice pace the time has passed relatively quickly, the early start in the darkness now seems an age away and the day has only just began…

the reason we’re here…the 2nd half of the day!

You’re halfway, but the uphill struggle is over, you’ve made the top and the fun part is about to begin!

Neil’s news from the Chamonix Valley…

The Snowline is getting lower...winter is coming!!