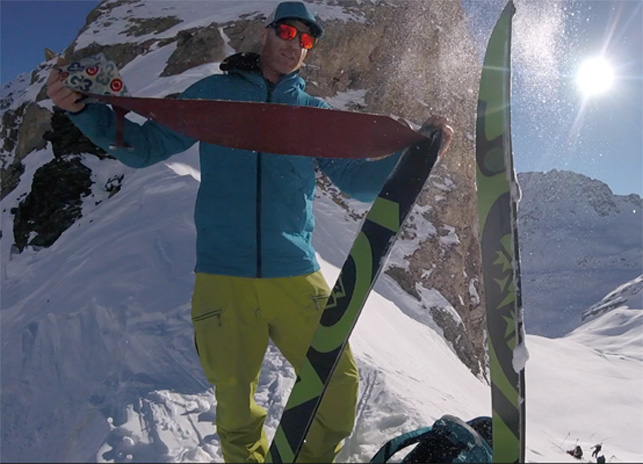 I visited the amazing Lofoten Isle twice during the winter 2016, the first time, early in February with legendary mountain film maker Seb Montaz. The days were short and sharp, the weather changed every 15 minutes and the sun rise, seemingly, lasted for hours, briefly peaking its rays over the horizon before slipping its way into an equally long lasting sun set.

The colours were fantastic and we hiked and (seeing as Seb usually works with the speedy likes of Killian Jornet) basically ran up and down the mountains to try to get some good riding and some good footage in the bag. It was a great and impromptu trip that left me yearning for more.

Later in the season I returned with a group of my regulars for one of my Backcountry Splitboarding Voyager trips. The daylight was longer, a lot longer, all night longer. The snow was deeper and the terrain equally amazing but a lot more accessible due to more stable weather and longer days.

We hiked and explored, took a boat into the land of the trolls, went surfing in the city waves and had an equally amazing trip.

The 2017 season was a strange one for the Alps. Low and late snowfalls that frequently didn’t reach the valley floor and fluctuating temperatures made for some often challenging conditions.

I hiked  a lot, visited new locations in search of paradise and generally stayed high up amongst the peaks where the snow was still cold and more abundant whilst always keeping a sideways glance at the conditions up North.

Like elsewhere, Norway was having a tough time, snow followed by rain, more snow, more rain but then as April approached and my BC Voyager trip loomed the Norwegian winter arrived and it dumped with snow…

We arrived in Lofoten to deep snow, a star lit night and the usual smell of ‘drying’ cod…

we awoke to driving rain and strong winds… Aargh!

With a keen crew at my back, we headed out anyway, hiked a local peak in the blizzard before retreating back, riding glue like soup, to our sea side cabins to empty the water out of our packs, pockets and iPhones. A quick visit to the local climbing store ensued to purchase vast quantities of waterproofing products that we then inhaled for the rest of the evening due to our over enthusiastic poorly ventilated indoor use.

The forecast was again grim for the next day but then improving, so we opted to visit the Surf in Unstad instead then and took the afternoon off to Sauna, Yoga and do some bouldering on the new Lofoten ski lodge wall.

Early morning residual cloud made route finding difficult the following morning so we opted to stay local and hike one of the lower classics that I’d not done before. A great Split up a long valley led to a two hour climb up a tricky ridge to access the upper slopes, where, with clearing skies, we found great spring snow for the way back down. From the ridge I’d scoped out a great descent and we surfed wide open faces, curling banks and narrow steeps back down into the valley below… things were looking up!

The next day dawned perfect, no wind and clear skies. We headed out towards the higher peaks hoping to find fresh snow at the higher altitudes. Another grand classic, another fantastic climb and we even found some fresh snow for the descent.

The clouds rolled in in the afternoon and it began to Snow!

Clear skies and fresh snow.. its on!

For anyone that has visited these isles, the mighty summit and peak to sea South Couloir off Geitaljetind has to be high up on the tick list. Visible from the road far across the fjord this mighty straight line couloir is a truly awesome line. Getting it in good conditions, all to yourselves and untracked, however is the key to true fulfilment.

We head up in glorious sunshine, first on Splits, then crampons for a steep section then back to Splits. Two fast jets buzz over the ridge just above us, barrel rolling as they drop into the valley, diving down over the sea, the roar of their jet engines following some distance behind. The cloud starts to boil in over the sea and soon we are in white out with heavy snow falling. There is still no wind and we continue upwards, at worst we can head back down the same way and we’ve been hiking through deeper and deeper powder for some time now so even this would be a great descent.

Eventually we pull up onto the ridge below the summit, the entrance to the couloir dropping into the mist somewhere to our right. There are quite a few other teams out, but all of them are already pushing ahead, eager to make the summit and as yet the couloir is untracked.

The heavy clouds begin to shift and suddenly we can see the couloir and the sea far below. I need no further sign and we quickly change into ride mode as the skies clear and the perfect untracked descent lines up before us.

The Couloir is steep, long and the snow forms a perfect wave on the left bank. Halfway down the snow transitions from powder to spring corn just ripe for high speeds and big carves and all too soon we are at the teepee that stands on the shoreline below. A short hike around the coast and we are back at the van.

For our final day I’m looking for something special. There are so many good looking lines visible from the road that its always tough making the call. In the evening I call a local guide for some ideas and he tells me about a line he’s seen deep within the mountains far from the regular haunts where the snow is deep and fresh. I get out the map and start planing the day.

I love exploring new ground, reading the map, making it up as you go, reading the terrain, learning from the mountains and letting nature guide the way. We drive inland, park the van at the entrance to an almost hidden valley and gear up. Soon we’re breaking trail through deep snow and dense woodland, the hike is technical and we’re on and off the splits for climbing sections until once above the treelike we enter into a huge deep u shaped valley full of powder and surrounded by peaks. Nature leads us upwards towards a steep couloir that crowns the amphitheatre above us. The final section is steep and on crampons, the slopes up here are loaded from the wind blowing over the top and I suspect there will be a slab forming high above. I put the group out of the firing line and start bootpacking up the side of the cliff face above keeping in tight to the corner away from the face. Sure enough I can feel tension building in the snowpack to my left and so whilst checking everyone is safe and I’m well anchored, I give it a good kick and away it goes. The slab release has left us with a perfect slope of soft powder and I boot quickly upwards to the summit above before calling the team up to join me.

The views are incredible and on the other side of the mountain lies an enormous amount of terrain calling out for future adventures. The descent is fantastic, a straight-line down the couloir into and open face of deep cold pow. We ride all the way down to the treeline before hiking up to access a ridge so that we can ride all the way to the road.

It’s been another fantastic week with a great crew and we’ve made the most of the conditions available and definitely scored the goods despite the abnormal conditions. Half the fun of my BC Voyager trips is exploring new areas and cultures, the hike and ride is only half of the journey.

My journey back doesn’t quite go as planned. A faulty jet engine on my flysas flight puts me into a 6 hour delay, I miss my BA connections which I can’t get a refund for despite racking up a huge mobile phone bill listening to their beautiful music whilst trying. flysas won’t give me a hotel for the night despite us landing in Oslo at 11pm.

I buy new flights for the morning with Swiss air. As I stand to board the flight in the morning i’m informed of a delay as they can’t start the engine! I eventually make it home 24 hours behind schedule, unpack and get ready to repack for my BC Voyager trip to Riksgransen, Sweden…

The journey is the reward?

Merry Christmas! I hope you all had a great Christmas and are looking forward to…

True Silence is hard to find these days!

Just a quick post to announce the arrival of a new course on the Calendar...…