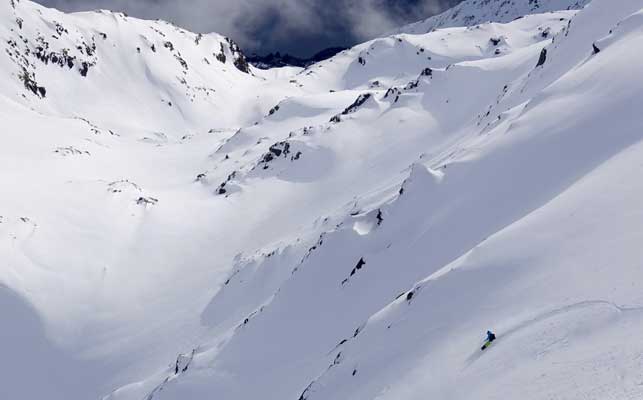 It seems a little strange to be writing a blog about, the Winter so far, when its only the end of November/start of December but as you probably saw by everyones excited media posts (my own included), like last year, Winter came quite early again…and then unfortunately, like last year, kind of disappeared from the valleys and receded back up into the high mountains. Unlike last year however, the snow in the altitude is good and plentiful…if you know where to look!

Early November brought the storm of storms in from the North West, perfect for snow in the Western Alps and snow we got. Having just returned from 2 weeks of Surfing in the warm waves of the Canary Islands it was a bit of a shock to wake up the following morning to Pizza flakes and 50cm of snow on the ground.

It snowed for days the itch was on and I needed to get out.

Its too early for lifts, I ventured up to Le Tour for a look with the Pow Surf and Gaston the dog. I waded a short way up the mountain in Waist deep powder, Gaston, up to his belly even whilst following my furrow, turned tail and ran back to the van. I tried to ride back down, but even in a straight line on the steepest gradient, it was way to deep and with the storm raging it was getting deeper by the minute.

The buildings in Le Tour were heavy with snow, more than I remember seeing for years…This is it I thought, this is the big one and now all I wanted to do was get out and Surf mountains.

The storm was forecast to clear out so I made some calls and woke to blue skies and fresh in Tignes ready for a shred day with friends, Will Hughes, Jenny Jones and crew.

Catastrophes with the lifts breaking down and plenty of Queuing tried to put a spoiler on the morning but once up and shredding with friends all is good and by the end of the day we’ve all had face shots, surfed windlips and stomped drops.

I’m back home to Chamonix for the opening day of the Grand Montets. The weather is mixed in the morning and so I take a leisurely morning, pick up my Nephew Jed (a shit hot ski racer and all mountain abuser) and get up there just as the skies start to clear. Bad light and only the Bochard lift running, has kept the morning activities close to the pistes and with clearing skies we are treated to the Grand Montets in full winter untracked glory. Its face shots every turn and we shred everywhere, Canadian bowl, Cigar gully, Italian Bowl, the Herse face, 3 or 4 runs top to bottom and we’re done. the legs are cooked and we’ve had our fill. I love this sort of strike mission. It’s the sort of thing you only get if you live local, the conditions are on and you’re in the right place at the right time. Storm, clearning skies, you’re in for the hit, have it big time and then out of there before the masses start to track it out.

The warm Fohn wind moves in and starts to blow the valley apart the next day. The deep snow in the valley that looks like its here for the winter starts to disappear and mild Autumn conditions prevail for the next 5 days. By the end of the week, the valley bottom is dry of snow and the strong winds up high have stripped away the exposed faces. On the up side, when the Fohn blows we all know that the Italian side is getting the goods and so we watch the web cams and plan our assault.

The following Saturday I make a quick split mission up to the top of the Grand Montets to check out the conditions on the Glaciers up high. It’s a beautiful day and on the sheltered aspects I find some good smooth fresh, not deep but fun and fast to ride with some nice banks to cut and carve.

Italy is calling and so are my friends Rick and Isabell. Both are high mountain guides that I have know since I moved to the valley some 20 years ago, Rick is one of the fittest Guides out there, even at my fastest pace he’s still talking as if we’re barely moving. Touring with him is always a daunting task as you know you’re in for a hard day. He lays out the options, a two peak hit which sounds massive or a quicker tour which won’t take as long. I quickly work out that the quicker tour is the same tour but at a faster pace!

Rick knows every corner of the Aosta valley and with Isa joining us I’ll have someone to to hike and chat with at a more manageable pace. the following day with blue skies and not a breath of wind we hike out in perfect snow and score the goods big time.

Conditions are strange, it’s almost like spring down low, warm and zero snow in the valleys but then there’s super cold powder and its full on winter up high.

The last storm came in with moist warm air from the south that hit heavy in the Southern Alps dropping of a meter of snow above 2000m, but brought rain in the lower altitudes. The Western Alps, Chamonix included experienced a strong warm fohn wind that dropped some fresh snow up high but stripped the valley of winter and dropped us back into a cold mid Autumn sort of spell.

We now have a high pressure pattern sitting in, similar conditions to last December, (cold crisp blue sky days) as the effects of our warming climate wreak havoc with the notions of normality and warm air pushes the jet stream thus North holding the Winter Alpine storms at bay.

On the plus side, Norway is getting it good at the moment (fortunately I’ve concentrated all of my BC Voyager activity up in the Scandinavian North) Italy is holding the goods for now, Tignes and Val are looking good for the pre season shredders and Winter is definitely on its way.

Early days, Winter is coming so get fit, ready and get your stoke on!

A summer of change…

It’s now August, the middle of the summer and I’m busy guiding in the mountains,…

Hi Neil. I believe the Hovercraft only used to go up to 160cm but now…

The times they are a changing…

On Friday, in two unrelated separate incidents in two different locations within the Mont Blanc…