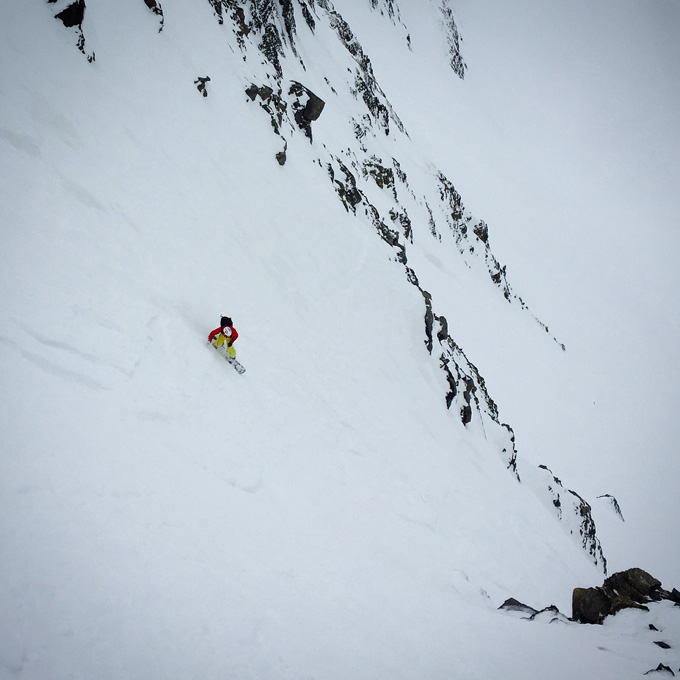 Its been a while since I found the time to sit down and write my blog as the winter has been racing on through, so hopefully you’ve been keeping score through the ‘McNab Snowboarding’ face book page and checking the videos out on the McNab Snowboarding YOUTUBE channel which you can subscribe to at your leisure!

A lot has passed since my last blog post, lots of courses, loads of riding and lots of changes with regards the conditions and the weather.

As I finished my last post, I was packing for Gressoney and one of my BC Voyager trips. Gressoney lies towards the Southern region of the Aosta valley and is nestled in the heart of the Monte Rosa Massif.

Monte Rosa at 4634m is the 2nd highest peak in the Western Alps and the Monte Rosa Massif boasts an impressive 15 peaks that soar above the 4000m mark. The range is surrounded by many more famous peaks that tower above this lofty altitude, such as the incredibly picturesque pyramid of the Matterhorn, the huge bulk of the Weisshorn, the shark fin of the Dent Blanche and the soaring twin peaks of the Dom and the Taschhorn.

I first ran a trip to Gressoney some 10 years ago and loved the area. The free ride potential is massive, but it took me a climbing/guiding trip last summer to make me remember just how good it really is.

Since I first went, a new lift system has been installed, the highest lift now runs up to the Indren Glacier at 3275m and opens up a whole heap of terrain that was previously only hike-able and which now makes access to even more hike only access terrain.

Along side Gressoney you have the valleys of Alagna and Champoluc which are linked through the lift system and make this a vast area of discovery and an amazing Freeriders playground.

Being to the South of the range and above the Italian plains does have some drawbacks and the valleys here can be plagued by strong winds and rapidly changing temperatures, both of which can make some areas rather avalanche prone and caution is needed when picking and accessing lines.

These rapidly changing conditions however can also mean that the area receives a lot of Snowfall and so it is worth keeping track of conditions down there even when everywhere else is looking quite dry.

The rapidly rising temperatures mean that the snowfall doesn’t stay fresh for long and so being there when the conditions are working is an art in itself.

If you get it right though, you’re in for a worthy treat!

My Voyager group made a  rendezvous chez my house, we packed the van and headed on down the Aosta valley sampling fine Italian coffee on route.

We stayed in the very fine Nordend Hotel and were immediately treated to overnight snowfall, just to get things going in the right direction.

With a snowy and cloudy first day we sampled the excellent tree riding low down and as it cleared in the afternoon were treated to the amazing views of the high mountains above and started planning the days ahead.

The team hike for the good in Gressoney

By the end of the week we had tasted a fair range of the goods on offer, with both Splitboarding days and lift accessed Freeride days.

It was an amazing week and the potential is massive, as we left I vowed to return on a regular basis…

When I left Chamonix the week before the conditions had been all time!

I’d just scored the Glacier des grandes descent in the best conditions I’d seen for years and it has started to look like the season had kicked itself into shape.

It was a massive, and not nice, surprise to find that on my return, gale force winds had pretty much stripped everything back to the base and after a quick free ride discovery day with Ruth, I was surprised find conditions were back to an all time low.

Of course, here in Chamonix we have the benefit of the ‘magic tunnel’ and Italy was once again the shining light of glory.

I kicked off my return to Chamonix with a 3 day BC Slackcountry course, hitting Italy, the Grandes Montets and Le Tour in good spring conditions, whilst also keeping an eye out for possibilities for the up and coming ‘Steep and Deep’ course.

Constantly changing conditions, fluctuating temperatures and a lack of snow, on South facing slopes and low down exits, meant that finding good lines to ride to the valley was getting difficult and many of the South facing steep couloirs such as the ENSA on Brevent were seriously out of condition.

On Monday morning, with a ratio of 2 riders per guide and a good strong group of riders, my self and fellow Guide and (Wiggo look alike), Simon Abrahams headed through the magic tunnel for the first day of the ‘Steep and Deep’ course to see what we could find back in Italia…

Of course in Italy, it was snowing once again!

With little in the way of visibility, but good snow on the steeps, we started out day one, warming up, with some inbound couloirs on the Freeride World Tour face, following it up with a steep couloir in white out conditions down into the Val Veni.

Day 2 with the top lift of the Arp closed we splitter around from the Youla and hiked up the steep North Face of Mont Nix testing the snowpack with multiple pits as we went. The snow was fantastic and finally we had some both ‘Steep and deep’ to play with.

Iain Mcloughin on the North Face of Mont Nix

Having learned that ‘Gressoney’ was being dumped on, we planned and early departure for Wednesday and hit the Giachetti Couloir with 1 meter of fresh snow…perfect…things were definitely hitting the ‘Steep and Deep’ range.

Thursday, we hit the Helbronner for some serious ‘Steep’ action on the Glacier Marbree. With Spring conditions prevailing back in the Mont Blanc Massif, we waited a little for conditions to soften before getting the ropes out and abseiling into the face to acclimatise to the angle and exposure.

After a quick 50m rope assist, the guys were ready to ride and the descent was ‘steep’, exposed and perfect.

The final day we headed up the Helbronner one more time to try to ride a Steep line off the Entreves. Unfortunately, our line was shut down by an ‘ill timed eclipse of the sun’ and the softening of the snow we required was delayed until to late in the afternoon. We rode some nice snow down the Glacier Youla and were content with another great week…

The view of the eclipse from high on the Helbronner was pretty amazing too!

Last week I had a BC do anything/make it all up sort of course with a group of my regulars, a week we now term BC ‘project X’…

With fresh snowfall once again just before the start of the course and a perfect forecast for Monday, I dropped the PX team straight in it with a Valley Blanche variant off the Aiguille du Midi.

After a steep drop in on the South face from the Midi ridge, to get the legs warm, we found excellent deep snow on the ‘Gross Rognon’ face and scored a great day riding and sight seeing in the Valley Blanche…my first VB of the winter!

Day 2 we took it to the Grandes Montets and started off with a high performance technique master class. We looked at finishing off toeside turns and getting more power into the end of the turn. The PX team lapped it up and before midday massive changes had been made as we headed up the top lift for a couple of runs on the steep glacier descent of the ‘Face’.

Once again the FWT couloirs were in shape and we took in some steeps in Courmayeur whilst it snowed up high on the Helbronner ready for a hit on the Youla Glacier the following day.

Jim (undercover) Storey keeps the mission covert on the Steeps.

We finished off the week with some more serious ‘Steep’ riding on the North face below the Arp, before hiking to the Crete de Youla and riding in to the Val Veni for a well earned feast.

I have one more week to run here in Chamonix, with my 2nd ‘Steep and Deep’ course. I was about to change the name of this course to ‘Steep or Deep’ which this season seems more appropriate, but then its forecast to put down about a meter of snow in the next couple of days so the name might just stick!

I did hear that Gressoney was coming back in…

I’m away most of April, I have to head back to the UK to get my Russian Visa sorted out before heading off to the Lyngen Alps up in the Northern Fjords of Norway.

I’ll follow this up with 2 weeks Heli Guiding in Kamchatka which will take me through into May and then there is the possibility of a quick Lofoton trip, a location that I’m working on for a BC Voyager trip next season…Splitboard and Surf trip anyone?

Then of course there’s Greenland, Kamchatka, Iceland and I’ll need somewhere for mid season like Kashmir or Krygystan?

So many places to ride and the winters are speeding by…

Until the next blog have a good ride!

Gravity grips as I drop into the fall line, my speed races, the cold air…

Hey Neil, hope all is good. A couple of friends of mine (skiers) are heading…

Splitboard buyers Guide… a few tips about what works and what doesn’t?