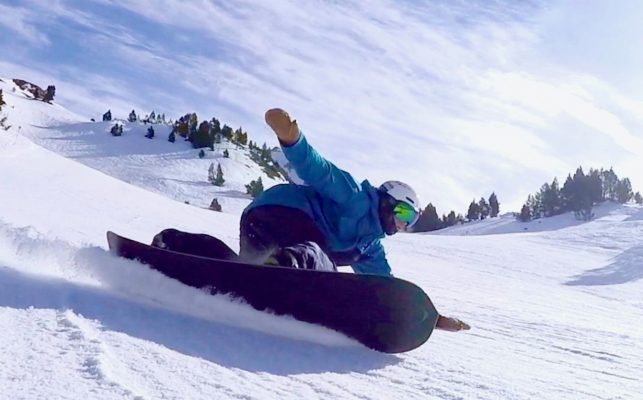 Some of you might have been out on one of the test weeks in Baquiera last season and tried out one of the demo boards.

Some of you might know nothing about it and some of you have come across the project and have been writing in with questions about the boards.

If you’re new to the project then go have a look at the new website  www.mcnabsnowboards.com

So we’ve been getting a lot of interest for the McNab Snowboards project and a lot of questions about the boards so I thought I’d write a piece to explain a little more the idea and reasons for taking on this new journey.

I’ve been snowboarding for over 3 decades, 35 years to be precise and yet the last time I actually bought a Snowboard was way back in 1989. I competed in the British Championships on that board, won national titles and I’ve been a ‘sponsored’ rider ever since. In the past 30 years I’ve ridden for some of the major players, I started out on Burton, way back in the Brushie/igguchi era, had a major pro contract with Nitro as a World Cup rider, moved into Freeriding as Salomon came into play and then after riding with Jeremy Jones, as he tested his very first prototypes in Chamonix, I have spent the last 10 years as an ambassador on the rapidly developing Jones Snowboards machine.

During all these years, I have progressed my understanding of how Snowboarding works, the techniques, the movements, the links between subtle movements of the feet, the board and the turn.

I have taught, guided, written technique books, coached and developed teaching systems, whilst all the time exploring my own riding, my understanding and the philosophy behind how I link my movements to apply pressure through my board to flex, tilt and turn to create the line, speed and flow that inspires my ride.

For me, there’s nothing beats the feeling of a deep clean powerful turn, be it in half a meter of fresh or holding a clean cut arc on a few mil of edge on icy hardpack.

Don’t get me wrong, I love a side hit, I love a drop, I’ve ridden Pipe, I’ve ridden park, but the one thing that keeps me coming back year after year, day after day is the clean powerful feeling of the arc in flow with the natural terrain of the mountain. It’s basically why I ride!

There’s a direct link between what we do with our feet and what our Snowboard does.

There’s a direct link between foot pressure, edge tilt and board flex.

There’s a direct link between where you apply pressure along the length of the edge and shape of turn.

There’s a direct link between the shape of the sidecut, flex and camber.

There’s a direct link between the effective distance from your foot to where you apply pressure and tilt to the edge of the board to both start and finish a turn.

There’s a direct link between the shape of the sidecut, the camber and flex and the distance from your feet to both the initiation point and completion point that gives a board its properties and shapes a turn from start to finish.

However, most Snowboards are designed to be ridden and flexed from a central point somewhere in the middle of the board with sidecut, camber and flex matching this ride profile.

We’ve had reverse camber, mixed cambers, serrated edges, spoons and channels, but for me, nothing has really matched the tip to tail profile of riding that I yearn for.

Riding for Jones, was a real eye opener.

Seeing Jeremy start and build the brand in such a short space of time to what it is today has been nothing short of amazing.

His freedom to play and explore with the boards kept things fresh, exciting and definitely inspired the way that I’ve developed and how I look at and ride the mountain.

For me however, whilst the boards have always brought something new and exciting, performance wise I’ve always felt that, for me, there was just something missing, a slight lack in connection to the way I want the board to perform.

I’ve been playing around with board design ideas in my head for years.

With every new release, I’d question the how’s and why’s, absorb the ‘points fort’ and acknowledge the areas that I felt could be developed.

I’d question why this worked, why this didn’t work and look at what I’d do differently. I’d offer feedback, some of which would be taken forward into future designs whilst some would be lost in the mix.

Designing my ultimate Snowboard has always been a dream.

Imagine having a free canvas on which to try out all your ideas, see what works and what doesn’t. Find out why everyone does this the same? or maybe, just maybe find something new that works and takes things to the next level which you’ve been searching for.

I like to be able to carve, drive and change the shape of the turn as I ride.

I like to start the arc at the front of the board and finish it through the rear. I like to feel the difference between the pressure and tilt of the front foot as it flexes the board smoothly into the turn and the powerful cut and drive, combining deep sidecut and camber, for the snappy finish.

Like a surfer on a wave, I like to draw my arcs to suit the terrain, soft entry, sharp cutting finish, long laid out arc to speed snap. I love surfing banks, slashing wind-ups, sliding the tail over floating rollers, seeing how much I can edge on the hardpack, driving off the back corner as hard as I can physically push.

I want a board that can do all these things, a board that inspires me to ride harder, to ride better, to feel new experiences on a day by day, run by run, turn by turn basis.

That feeling of having to back off because the board has rocker instead of camber, not being able to finish the turn when you wanted, heel drag, toe drag, speed wobble, too long here, too short here…

I just needed a board that would do it all what ever the conditions, where ever I ride, a board to take me onwards and inspire my ride again.

And so this is why we started mcnabsnowboards,

This is what we are all about.

Phill, a fellow addict of the Arc and the Glide understood my ramblings. He made sense of my designs and he transferred them from my mind to the full working 3D version that i’m riding today.

The first time I rode one of our boards I was ready for it to be a disaster. I figured it would either work, or, I’d find out why it is that nobody does this stuff.

I made a few turns, I figured I’d probably swap back to my regular ride after a while. drop Phill some feedback and we’d keep on trying.

But I just never switched back!

I simply pushed a little harder, carved a little deeper, cut a little sharper and rode a little faster.

I still was a sceptic, I wasn’t completely convinced, always waiting for that moment were I’d say ‘Ah, ok now I see, that is why they don’t do that’ or ‘ok, so we need to change that’, but that day has not yet arrived…

Our boards are designed to be ridden from tip to tail, front foot to back foot, blending body movements, foot pressure, tilt and board flex to shape your ride to the terrain of the mountain.

The sidecut, camber and flex are designed for a smooth turn entry and a sharp snappy exit, designed for drawing inspired lines all over the mountains blank canvas.

If you’re an addict of the glide, the slide, the arc, an #ilovesurfingmountains advocate then you’ll definitely love riding our boards.

Educating myself on a changing climate with POW UK

As a Mountain Sports professional with 30 years in the high mountains behind me, I…

Getting the Winter Stoke on!

Winter is fast approaching once again, the mountains are getting their winter coat on and…

Gravity grips as I drop into the fall line, my speed races, the cold air…