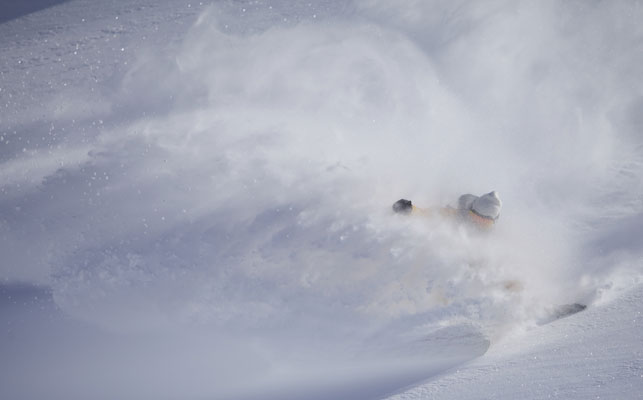 There’s something incredible about carving an arc, it doesn’t matter what your mode of movement is, Snowboard, Skis, Bike, Surf, Skateboard even running, whatever your choice, the feeling of the arc, the tightening curve, the lean towards the centre, the increasing force and finesse of contact with the ground and the powerful resistance that grows towards that ultimate point of hold and then release into the next movement just simply keeps us coming back for more and more.

Through out my snowboard career, I’ve always been addicted to the arc.

From the moment I stepped on a board and felt the natural track of the edge, to the power of the arc as a World Cup racer, from the first flows Off piste, to the search for the steep and deep, the power of the Arc has kept me entertained and addicted and keeps me coming back for more and more.

Having explored and adored this feeling over many disciplines over many years, I can honestly say that for me there is no finer expression of the arc than that which can be made on a snowboard.

There’s something about the clean track of that single edge, the ability to change the arc by subtle movement from the front of the board to the back through a stance that is perfectly positioned to do this.

The ability to bend, flex and balance deeper and deeper as you demand more angle to the edge and more power through your feet. The power to tilt onto and away from the edge, increasing and decreasing bite, grip, pressure and flex, not as one whole unit, but as ever changing parts of a living ride, and the ability to not only push against, but to pull, flexing the board to shape the perfect arc for the terrain and feeling you desire.

I’ve pretty much based my life and career around the art of the arc. In my early days of riding, mid 80’s, I was fascinated by the natural arc created by the simple tilt and sidecut of the board, something I’d never found to such a degree as a skier or ski racer.

In the early to mid 90’s I explored its potential through training the disciplines of Slalom and GS racing, working out the power of the movement from front foot to back foot to bend the front and rear of the board in order to change the arc shape and push power through the board.

Mid 90’s I worked on bringing these findings to Snowboard teaching. I worked on developing a gentle progression that taught the use of independent foot work, to tilt and flex the board to manipulate the 4 contact points to make it turn by design through the feet rather than the force of the upper body.

This process led to the introduction of the ‘mcnab pressure control system’ as detailed in my book ‘Go Snowboard’ and added content to the instructional progression commonly used to teach snowboarding today.

As a Professional Freerider, late 90’s to, I guess, present day, I have enjoyed exploring the journey of adapting this knowledge of technique, board design and body movement to fit it into a feeling and line that matches the terrain and outcome that I desire in terms of Speed, line and flow.

There’s definitely something about the power and precision of movement that we get from the snowboard stance in an arc.

There’s a feeling of micro movements within each movement that allows for such a great feeling and accuracy in each turn that we make.

Snowboarding become more than just a ride down the mountain, it becomes Art. It becomes an extension of your feelings and your inspiration allowing you to express yourself to the best of your asbillity within the terrain that is presented beneath your feet.

The physics of the arc, starting at the front most point of contact of the edge ‘into’ and last point of contact ‘out of’, means that we are perfectly positioned to feel, control and play with balance, force, tilt, angle and flexion of the board through out every stage and incremental point of the arc, more so in snowboarding than in any other sport that I have explored, partly I guess due the fact that we can bend and tilt the board along its length to influence the shape of the arc so much.

Recently, I had the fortune to hook up with a long time friend, Snowboarder and Surfer, Matt Barr for his, wearelookingsideways’ pod cast. During our chat we skimmed over many subjects, one of which was my philosophy of simply turning my board and matching line, speed and flow to the mountains natural terrain, something that Matt had never really thought of on these terms. For me, this was something of a surprise as I imagined that everyone used these same principles and this same understanding in order to connect with and ride or surf the mountain.

As such, I thought I’d write a quick study on the art of the arc as I understand it…

We’ll start at the beginning with ‘understanding the essential elements of turning a snowboard’.

In order to turn a snowboard effectively in an arc you need to have control and an understanding of the three essential and primary elements involved in this process.

The Physics, the Technology and the Bio Mechanics.

In Part 2 next week we’ll take a look at these essential ingredients and look at how they can be used to turn the board by design rather than by force.

Are you seeing changes in Climate/Conditions in the high Mountains?

Recently, I had a question asking me for comments about the changes I might be…

The Fine Art of Riding with ‘Flow’…

Flow Most often, the most fun riding I experience comes when my riding simply flows.…