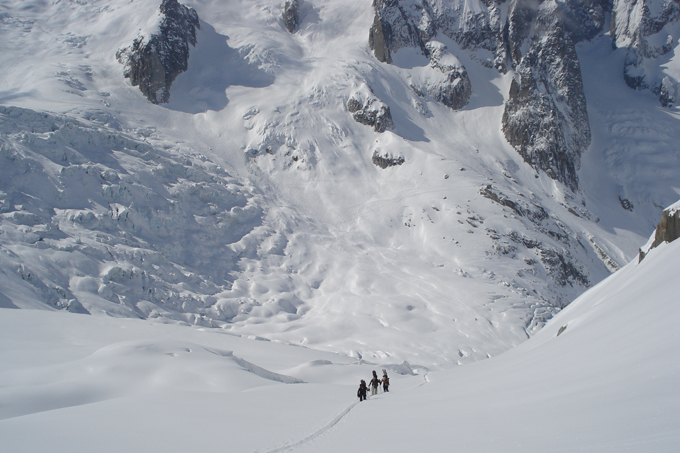 Remember these days way back when we had to carry our boards and hike on snowshoes?

I think I spent about 15 years hiking around the Chamonix massif in this manner!

Back in the mid 90’s I tried Splitboarding for the first time on one of the first Burton Splits. I did a solo hike up to the Col de Belvedere in mixed weather and spent about an hour sitting on the ridge at the top trying to put it back together in freezing conditions and howling winds. In the end I managed to get the bindings back on by hitting it with my Ice axe as everything had frozen up. I kind of destroyed the board a bit but by this time I was so pissed off with it I didn’t care. The hike up had been fun, not carrying your board was a nice touch, but this is when I first discovered that on these early splits, the hike up was as good as it got. The ride down was a real shocker, the board handled like a noodle and I think I probably side slipped most of the way home. I went back to snowshoes for a while after that!

I tried Splitting again a few more times through the late 90’s and into the early 2000’s but with little success. By this time the voile system had come around and so the change over wasn’t a problem anymore but the lack of performance on the descent kept me heading back to my Snowshoes.

I remember clearly the day that I decided to give it a real go and to try to find a way to make it work! I was hiking in the spring with a regular client of mine up at the Col de Grande St Bernard. We were hiking back to the monastry up on the Col after a big day out, it had got really warm and I was breaking trail sinking up to my thighs in spring corn with a heavy guides pack and my board on my back as ski tourers whistled past barely breaking the surface of the snow. By the time we made it back to the refuge my mind was made up!

Fortunately for me, the next year I met and rode with Mr Jeremy Jones, who was just about to start up his company Jones Snowboards and the rest as they say is history.

I now spend most of my season with my feet stuck to a Splitboard, every year they get better and lighter, the bindings and fixings improve and my world just gets to be more and more fun.

It’s amazing where we can get to these days, we can go so far so quickly and get out into zones that before would have taken a couple of days of big ass effort. I’m not saying you can’t do all of this on Snowshoes, but the effort involved is doubled for sure.

In this photo we’re high in the Perriades on the far side of the Valley Blanche. A descent from the Aiguille du Midi down the Envers leads to the plateau below known as the ‘salle a manger’ (the dining room) at the bottom of the Geant Icefall, quite ironic really as it’s probably the last place you’d want to eat your lunch with all those serracs above you!

The Refuge de Requin can also be seen just up a little and to the right of the guys but on the opposite side of the valley.

From the Salle a Manger we’ve hiked for an hour and a half up the very active and crevasse ridden Glacier des Perriades to get up here. We’ve about another hour or so to go until we’ll stop and change over, snowshoes on packs etc for the descent.

It’s an epic ride down from here, I do it quite often these days as getting up to this spot on a Splitboard is almost fun compared to the effort it took back then.

It’s an amazing and beautiful zone in the heart of the high mountains. You’re totally surrounded by high peaks and huge Glaciers and there are so many different climbs and descents out here that you can keep coming back time and time again without repeating the same route, the potential is enormous.

As you can see in the shot, the snow is perfect, there’s no one else out and we’re in for a perfect end to another great day!

20 years of McNab Snowboarding…Not so bad!

Hi Neil, Quick question, I'll get a new Split this year and was thinking of…

The Fine Art of Freeriding!

Latest News from the World of McNab…in Tignes…

So what's new in the world of McNab? Well my season is off to a…