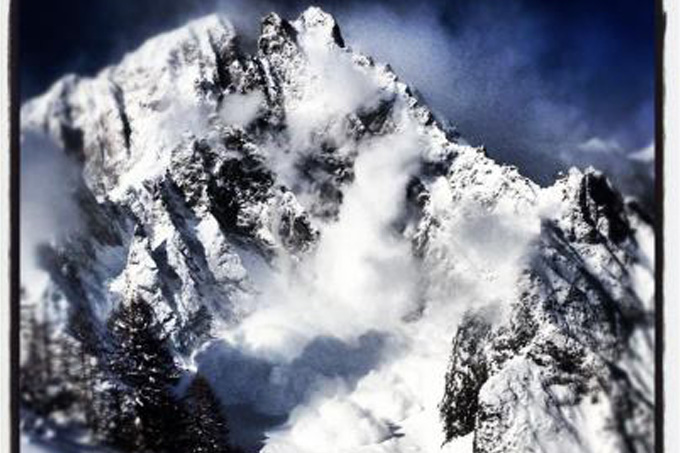 There are two common types of avalanche: the ‘looses now’ avalanche and the ‘slab’ avalanche.

Loose snow avalanches start at a single point and grow as they flow down the mountain. They are easily recognised by their triangular shape, and most commonly occur immediately after fresh snowfall (look for that tell-tale sluff) or in the spring, when warmer temperatures release heavy ‘wet slides’ on all gradients.

Slab avalanches occur when a large, well-bonded slab of snow releases en-mass from a weaker layer buried in the snow pack. They are distinguished by the wide horizontal crown wall across the top, and the smooth sliding surface left underneath (see pic).

Whilst both types of avalanche can have devastating consequences, the slab is the one most commonly ‘triggered’ by skiers and snowboarders, and the one that poses the greatest danger.

How slabs are formed?

1.Like the rings of a tree, the snow beneath your feet is made up of many layers that tell the history of the changing winter conditions, snowfall, wind and temperatures. These different layers don’t always bond well together, creating weaknesses that affect the stability of the snowpack‑

2.Wind slab is a dense, strongly bonded layer that forms quickly as tiny grains of windblown snow come to rest on a sheltered slope. In itself, a slab can be very strong, but if it doesn’t bond to the layer underneath – or there are weaknesses buried further down in the snowpack – it can create highly unstable conditions.

3.Wind accelerates over mountain ridges, carrying snow with it, and so slabs o‑ en form on the sheltered ‘lea side’ of a ridge. On sheer drop-off s above concave slopes, the snow will build into overhanging cornices and load the slope below. Over rounded ridges, it will create dangerous, avalanche-prone convex slabs that extend into the steeper slope below.

How do I avoid a slab avalanche?

1. Timing– The highest risk of avalanche is in the 24 hours following fresh snowfall. If the fresh snow was influenced by wind, then the risk of a slab avalanche is extremely high!

2. Wind– Even when it hasn’t snowed for many days, if it is windy then older snow can be blown around and form dangerous slabs. Look for signs of current and previous wind activity, and think about where and how the snow will have been deposited.

3. Terrain – Terrain shape is extremely important when it comes to risk assessment. Imagine that gravity is trying to pull the snowpack down the hill, and look for the areas of most support, least support and greatest tension. Use this information to plan your line and make your decisions. Convex rollovers are especially dodgy!

4. Recent Slabs– Note previous signs of slab activity and look out for new ones. Think why they occurred. Slopes of similar aspects and altitude might also be at risk

5. Appearance– Wind slab is smooth but dull in appearance and has the feel and consistency of polystyrene. Learn to recognize it and keep checking the consistency of the snow as you go to help you map out a mental picture of what is going on and where.

6. Temperature– Temperature greatly affects the stability of the snowpack. Early season and overnight cold temperatures can freeze the snow crystals, causing unstable layers that can then be buried. Sudden temperature rises will also make the snowpack unstable and more prone to slides, so be wary of slopes getting strong sunlight and noticeable air temperature increases. This is why north-facing slopes tend to be more stable.

7. Noise– ‘Whumping’ or fracture lines signal both snow slab and weak bonds. The scary ‘whumping’ sound of the snowpack settling is a sure sign of danger hidden beneath your feet, and if you hear it you’re either fortunately on terrain too fl at to slide or you’re getting avalanched! Cracking snow layers tell of dangers ahead.

8. Pitch– The optimum angle for avalanches is between 35 and 45 degrees – as sod’s law would have it, the perfect riding angle. If it looks good to ride, you can bet the risk is there!

Most riders get avalanched on moderate risk days when they are caught off guard. Remember, safe passage off -piste is all about good decision-making. Imagine the risk is there, increase your awareness and question everything!

A season like no other! So finally the winter has come and its starting to…

It seems a little strange to be writing a blog about, the Winter so far,…