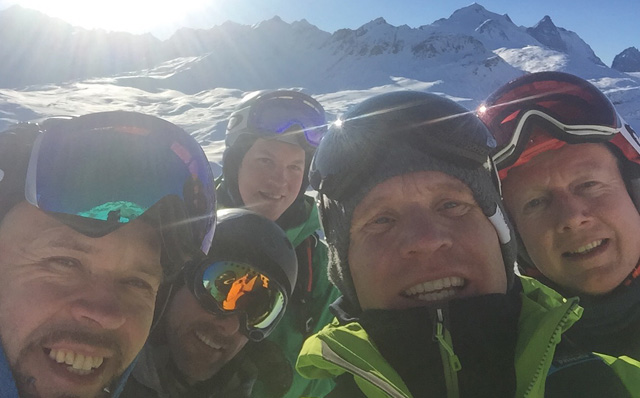 I’m just back from my first course of the Winter season that I ran over in Tignes. I run a pre season warm up week over there every December to work on Technique, have a shred about and try to get out on the Splitboards to find some steep and fresh.

Winter started early this year here in Chamonix, mid November and I enjoyed a great couple of weeks Splitboarding and Hiking up on foot for a shred on my new (binding free) Snow surfer.

This is so much fun that even as the temps warmed and the snow line started to creep back up the mountain, I’d often hike an hour and a half up to find the shaded snow deep and cold enough for a few good turns, before walking back down perfectly snowboard able pistes again instead of taking my Split.

In Late November I headed over to Annecy for the pre season Jones Snowboards meeting and got to check out the 2017 line up. So very, very nice! We all sat drooling as Jeremy ran us through the new developments, of which I’m sworn to secrecy so can tell you nothing except that we should all be very excited about next years boards!

I also received my 2016 Jones Quiver, which I am also very, very excited about…especially my new Storm Chaser and the 165 Carbon Solution (which after riding in Tignes last week I can honestly say performs and rides as well as my Solid board, even carving on hard pack and with out any stiffening anti V additions, life changing!!!)

The weather continued to be mild and clear and if its not going to snow, I’m perfectly ok with that and I continued my hiking quest for turns.

Early December, the Grand Montets opened and I splitted up and around the back to check out the longans Glacier, which is full of amazingly big holes, but I also scored a very nice run back down by the Rognons glacier and also enjoyed a couple of days riding inbound on the lifts, with some of the local Cham crew, to get the legs working and try out my new Carbon Flagship 165 (the solid version which is also amazing!)

The forcast remained clear and mild and all the excited talk of the ‘el nino’ winter petered out as endless storms battered the uk and then got pushed North to dump on Norway (in preparation for my Lofted Split and Surf trip no doubt!) and snow seemed to fall in abundance on every other part of the Northern hemisphere except the european Alps!

Late November, I had some very exciting news and finally joined the Ambassador program for Patagonia. Patagonia is a brand that I have always respected and followed and have been wanting to hook up with for many years. I have loved everything about the company since reading founder/owner Yvon Chouinards book, ‘let my people go surfing’ many many years ago and I am proud to finally be part of this team (even if it means I’ll have to cut back on high pollution Heli time!) Patagonia is and always has been one of the leading pro ’save our planet’ companies and I’m looking forward to representing and doing my bit as best I can.

Although Snowboarding isn’t the greenest of sports, I do believe that by being out there in the Backcountry and connecting with and learning from our natural untamed environment, we learn to respect our World in a way that changes how we live our day to day lives and even this small change is a good start and builds great opportunities for us to develop good healthy living qualities for the future.

For me loving Snowboarding is all part of the Healthy living package and I try to be aware of how I act, treat and share the World in which we live. Eating well and treating my body well are all benefits I get from my love of Snowboarding and the lessons I learn from the mountains that surround my life.

It feels difficult to follow the healthy pathway sometimes, both for yourself and for the planet, what with having to drive everywhere and all the excess packaging that we get thrown at us all the time, but it starts with moderation and grows and every little bit helps. Like with most things that I try to do and follow, I feel like I am at the start of my journey with all of this and that exciting times lie ahead.

Anyway, the Autumn days flew by and suddenly it was time for me to pack for Tignes.

My Patagonia kit turned up just in time, I threw all my new boards in the van, prepared for everything, and headed off to the Dragon Lodge to hook up with my team and my good friends, Tignes Snowboard legend Will Hughes (who runs the lodge) and the UK’s best looking Olympian Jenny Jones.

At 1800m, Tignes is right up there in the snow line and everything was open and up and running already. We spent a day hacking around the pistes to get some technique in the feet whilst also scouting for Splittable lines to Split and ride.

With the pistes being hard pack we were pretty keen to get out in the fresh and so on day 2 the Splits were out and we hiked a really nice looking peak with a couple of steep untouched couloirs leading from the top into a wide open untracked face.

On Tuesday night it snowed a little and so on Wednesday we had a charge around on the solids and ventured all the way over to the rapidly disappearing Glacier at the far side of Val d’sere and scored some great Off piste shredding.

Like the Glaciers on the Grandes Mottes, it is amazing how much these features have changed since I first came to ski in this area some 35 years ago and I clearly remember hacking short radius jump turns down the steep wall of the glacier above Tignes where today there is now only a huge rock face.

New rock bands and new terrain features get exposed every year as the Glaciers retreat. I remember not so long ago navigating down a Glacier here in Chamonix in a whiteout (after getting caught by rising valley cloud) and following a rock wall that I thought was the left edge of the Glacier using my map, compass and altimeter. This rock wall then stopped and disappeared some 500m to high, leaving me wondering how this could be and wondering if I was perhaps lost, as there were no features matching this indicated on the map.

As it turned out, the edge of the glacier was left again and the band of rock I followed was a new moraine feature that had appeared since the maps were updated. I tracked left and found what I was looking for and followed this until we popped out of the cloud a little lower and scored great untracked powder down to the valley floor but it was an interesting lesson I learned that day.

Thursday in Tignes, we headed out on the Splits again and scored first tracks down a really nice line, followed close behind by two groups of skiers with the same intentions. Nice to get in there first.

Friday, we again headed out on the Splits, this time heading out on a great round trip into the North Facing valley behind Tignes were we scored some really good cold untracked crystal snow in complete solitude. A second short Split brought us back into the lift system and we cruised back down for lunch to round off a great first week.

I’m now back in Chamonix with time off for Christmas and New Year with family and friends. Snow is limited but there is riding to be had and so I’ll be getting out and about and checking things out for the early season Chamonix based courses coming up. My first course here is a piste based Tech Clinic and conditions are still good for that so I can wait patiently for the seasons snows to begin.

In the mean time, I’ll be getting Yoga’d, Training and Running into the New Year.

Lets make 2016 into another great year!

Merry Christmas and a Happy New year to you all.

So first things first, after my last blog post, I have to report that so…

A great night out in France? Well what did you expect??