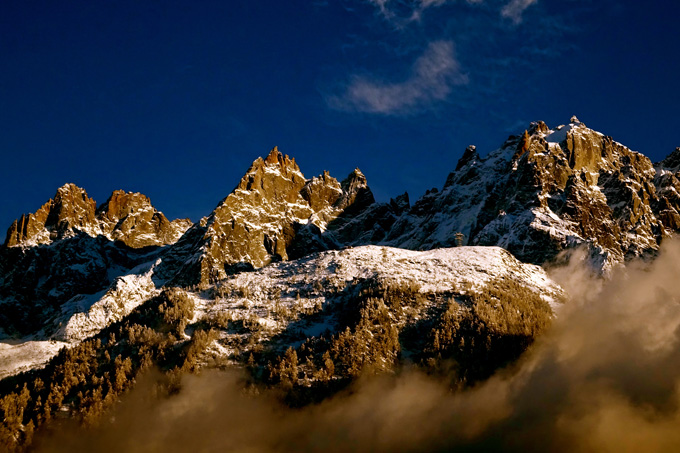 So it seems the local rumour about the increased mouse activity and the big start to the winter might have been wrong and after the early snowfalls it has been quite mild and relatively dry in the valley.

Another rumour is that it’ll stay like this until mid Jan and then winter is going to turn on big time?

This 2nd rumour came from a weather man, but who can you trust these days…I’m still a little inclined to go with the mice…although I still haven’t seen any?

Through the tunnel in Italy things were looking pretty positive and many enjoyed early season powder conditions in places like Cervinia and over the top into the upper reaches of the Zermatt Ski area.

Again, things seem to have dried up a bit since then but with the weather coming in from the South West at the moment it seems we might be spending a bit of time through the other side of the tunnel early on in the season, like last year.

Fortunately here in Chamonix we have the option of nipping through to Italia were conditions are often the complete opposite to what we have here in the valley and we have the option of heading up high off the Midi or the Helbronner accessing the Glaciated terrain where the snow pack has been building all through the summer!

I now have one week left before my season kicks off and I head over to Tignes. As elsewhere, Tignes boasted early season promise before things went dry and this mild weather came in.

Conditions up on the Glacier are still good and this is where we’ll be training and riding for the pre season Technical clinic in a couple of weeks time. Plenty of space for some early season Technical perfection and a good blast around to get the legs firing.

Back here in Chamonix I have been continuing my exploration of marginal gains through micro movements with a pretty heavy running program. I eventually found that running 10K or more everyday isn’t that good for knee tendonitis and so eventually took a day off. I managed to squeeze a big squats and leg press session into this rest day so all was not lost!

I’m now focusing on gym sessions to power up the quads on non running days and trying to work on good technique both in the gym and when running… Form is king!

Talking of training, my 7 year old daughter, Loren, did 43 pull ups the other evening in one of our sessions. I had to stop her from doing 50 as other wise she’d have had to do 60 next time. Admittedly she does them in ones and two’s but even so 43 is a pretty good effort in my book. Fortunately for me I was on a legs session so didn’t have to compete.

The quad tendon tendonitis is still there but doesn’t seem to be getting any worse, maybe i’ve just got to that stage in life were i just have to accept pain and MTFU and anyway the body rebalancing is going well. I’m braking movement habits and exploring new ones everyday.

Looking forward to exploring more of this when I’m riding this winter!

We’re having the pollution warnings in the valley again and down the valley in Passy it’s pretty bad! I ran down there today, whilst my daughter Manon was at Gymnastics, but tried not to breathe…I ran about 15K though, so had to breathe eventually!

I mapped it on my phone, which ran out after 11k and was fully charged when I set off…time for a new phone maybe…or shorter runs?

The Pollution problem should be ok though because to combat the problem they have made the speed limit on the Autoroute 110kmh instead of 130kmh.

This of course means that the 5000 HGV’s/day (the main pollution contribution), can still drive as fast as they normally do with their 110Kmh limit, so nothing changes as far as I can see?

I do remember they did this last year too and it made absolutely no difference to the Pollution levels but put an extra 20 mins onto a journey to the track.

20 minutes more driving at a slightly slower speed or 20kmh faster driving and 20 mins less driving time…Which is more enviro friendly? I’m not too sure?? Bet its close though!

Anyway, so long as we don’t exercise and stay in doors we’ll be ok…or we can head up high into the mountains where at altitude the air is still fresh because there’s less of it!

We had a small earthquake tremble the valley last week, a 3.3 on the ricter scale. It felt like something big landed on the roof of the house, the house shook and creaked and then all was quiet. We guessed it was an Earthquake but it would have been quite funny to have found a small plane smashed on the roof in the morning…Maybe not that funny but you get the picture!

Talking of ‘Picture’, I went to see the 2016 ‘Picture organic clothing’ range last week with Neil Thomson, a long time friend of mine and the UK’s ‘Picture organic clothing’ agent. It’s always once to see what’s coming and to see which way the trends are going to head before they do. They have some nice kit coming, as always its all about being planet friendly which you can’t argue with…

I’m hoping to get out riding and this week, a quick trip through to Italy with a friend of mine for a shred is on the cards, I’ll let you know how it goes.

Until the next time amigos

Hi Neil, Quick question, I'll get a new Split this year and was thinking of…

It's looking very white and wintery outside here in Chamonix right now! It's been snowing…

The morning after the storm!

The morning after the storm! I love this photo which shows Alastair and Mark's tent…