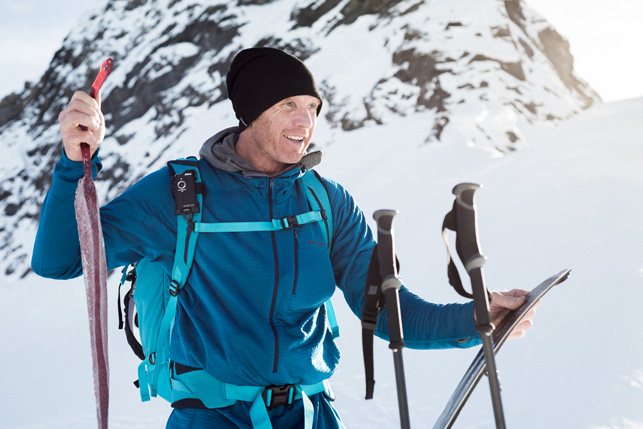 So since my last Blog post Christmas has passed and we’ve move on a year.

I finished off 2016 with a Video shoot for Nikon who are launching some new action cameras.

With no fresh snowfall for weeks and weeks I spent a co0uple of days out searching for rideable, accessible and filmable locations before the crew arrived. Satisfied that I had found the best the mountains could offer with the current conditions we ventured over to Italy for 3 days shooting Splitboarding out the back of Courmayeur and ventured up high with an early season steep descent of the Entreves off the Helbronner.

Conditions were limited, but we found enough to make the project work and came away with some pretty good footage. I look forward to seeing the 3 minute edit that should come out of it.

2017 started as 2016 finished with blue skies and no sign of fresh snow. Coming into the new year the Chamonix valley was experiencing full Autumn conditions and the lack of winter was no more evident than as I ran up to the summit of the Aiguiette des Houches in Shorts, T shirt and running shoes with Gaston the dog at my heels.

As the countdown to my courses began I kept track of the conditions over in Italy as a couple of good storms rolled up from the South dropping snow in the Southern Alps but delivering a dry foehn wind to the Chamonix valley.

With my first course rapidly approaching and no snow in the valley I made a few forays through the tunnel to check things out and came back satisfied that I had a plan for my first course, the Tech clinic starting in a few days time.

With still no snow in Chamonix but a fresh dump and good conditions in the South, we spent the 4 days of my Tech clinic through in Italy, kicking off with a warm up and Technique day on the groomers in Courmayeur.

We followed this up the next day with an early start and journeyed through to La Thuille, were we were pleasantly surprised to find some good fresh snow still evident and with a strong team ready for anything I quickly added some Slackcountry spice to the Tech clinic as we scored some great lines lapping the Fortress wall.

As we left I made note of some hikeable lines for future reference and 2 days later, whilst most people complained about the lack of snow, we were back to score more fresh lines returning to Chamonix with big smiles on our faces.

Finally the storm arrived from the North West and delivered snow to Chamonix. The snow kept falling and from nothing we went to valley shut down and we kicked off my first ‘official’ Slackcountry course of the season with deep powder shredding close to home in Les Houches.

A couple of days of deep storm riding later the storm cleared and we found ourselves on an early, well timed, ride to the top of the Grandes Montets.

With a -50C wind chill at the top we didn’t hang around long, dropping under the rope to the right for an awesome run down the untracked ‘Face’ to get things moving (a run were I had one of those OMG powder turns that you just ride away from almost stunned at how good it felt) and the rest of the day was spent lapping Glacial runs at high speed until no one could stand up anymore.

How to beat that?

I knew that the top lifts in Courmayeur had been closed the past few days and suspected that with the wind dropping they would be opening for our final day. We headed through under clear crisp skies to find the Val Veni car park almost completely empty and all the lifts showing green lights.

With no queues on the Youla (infact almost no people in the resort) we made a couple of quick laps of the Youla couloir which was in perfect condition before a trip to the top of the Arp and fresh lines all the way down into the Val Veni for Pizza.

Another fine day and a great final days riding with an awesome crew.

Looks like we’ve hit another dry spell right now, but conditions up high are pretty good and there are fresh lines to be had for those that search. I’m about to start my 2nd Slackcountry course of the winter tomorrow so watch this space!

The times they are a changing…

On Friday, in two unrelated separate incidents in two different locations within the Mont Blanc…

BC team high in the Valley Blanche…