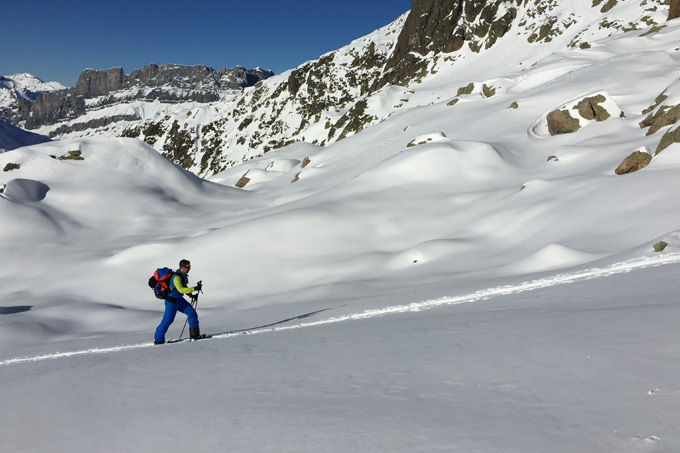 Happy New Year to you all, I hope its a good one for everyone!

Well its been a pretty weird winter so far hasn’t it?

it seems everytime we get a storm the temperature goes up and it rains instead of snowing!

Of course up high it means its snowed and if you watch the video or check out the photo’s of us Splitboarding and Freeriding on last weeks course you’ll see that if you go to the right places, the snow is still pretty good!

On a positive note…all this rain might help stabilize the snowpack a little bit if it melts out that bad layer that set in there back in December!

Since the early season there have been Slab releases all over the Alps, mostly remote triggered by skiers, snowboarders and people touring. This last week a slab of around 400m wide released on the South Face of Mont Buet, triggered from afar by skiers hiking up the safe ridge to the left of the face…A massive slide that didn’t catch anyone but I’m sure gave quite a scare!

Personaly I’ve been on full alert as usual and riding slopes that I feel are fully supported by the terrain underneath. I’ve dug numerous pits and checked the snowpack constantly which is what you need to do on every outing.

On another positive note…we have Snow forecast ‘with cold temperatures’ for tomorrow night…of course the forecast rely-a-ability is ‘poor’ which, as usual is written in tiny writing at the bottom of the chamonix meteo page…but we’ll wait and see, the weather maps definitely show something moving this way so let just hope that its cold enough for some snow.

unfortunately, there seems to be alot of wind coming with this next storm so as usual vigilance will be needed in slope and snowpack assessment once we get back out there.

If  it doesn’t snow, I’ll get my group and go find some as usual…I have a few spots lined up if need be!

So I took a couple of weeks off over Christmas and New Year, glad I did as it was manically busy in the valley and not much was open on the hill in terms of pistes etc, which made the few pistes that did open extremely chaotic and dangerous.

I was happy to not be a part of it all…

Instead, I took to the nursery slopes, got my girls out riding and started my own mini shred snowboard club…So now, instead of resting and prepping for my next weeks course on a Sunday, I have opted to teach snowboarding to a group of 6 to 10 year old girls…Fantastic…Great…Very Noble…Absolute Sucker!

If next time you see me I look really tired or harrassed…you know why! I’m hoping they’re not all like Loren, who absolutely already knows how to snowboard Dad!!! and so doesn’t need to listen to any tips or techniques that I might be able to offer up.

ok now get all of that on your back!

Anyway its was back to work for me last week after the hol’s and I’m always surprised at the amount of kit that I need to carry for the simple act of Snowboard guiding.

Here’s my day kit for a day touring up high! Now I have to get all of this into that pack?

Obviously, not the boots or board but most of the rest!

I had only 2 riders out with me, Jon and Paul, two regulars, who have been on trips with me to far off lands on more than a few occasions

Heading for adventure with Paul and Jon…

Both are strong riders and efficient Splitboarders, which enabled me to quickly turn the course into another, ‘do what ever I want to do’ type course, which I had renamed in readiness, the ‘Advanced BC Slackcountry Splitboard Course’…which I think has kept all bases covered and all options open non?

Maybe I should just name them all the same…?

Infact, we got a bit lucky, or maybe just great planning on my part, but it snowed the weekend before we started off with 2 days shredding off the top of the Grand Montets.

Jon getting some fresh up high on the Glacier.

We found fresh lines through the glaciers on front and back…

Paul B happy to be working on some Freeride technique!

Starting out on the Belvedere Cables

and got the ropes out for a steep descent off the Belverdere cables, to get the adrenaline flowing and keep things interesting.

It was pretty steep in places…

ok…it was pretty steep in all places!

Whilst riding at the GM, I had spied out a line over the valley that looked good and so on Wednesday we grabbed the Split kit and ventured out the back to the Col de Lac Noire and scored another great descent.

Seeing that there was good snow out the back we (well maybe I democratically) decided that Splitting was the way forward and we then hiked and rode fresh lines for the last couple of days.

For these last 2 days we were now joined by a Snowboarding journalist called Sean, from the Sunday Times looking to do a feature on Splitboarding.

Of course, in true McNab fashion, we threw poor Sean (who had warmed himself up the previous day with a couple of laps of the snowdome) in at the deep end and splitt’ed up towards the Col du Floria, a steep 40 kickturn initiation tour with a great descent.

Sean took it on well and we scored a great ride down, but not surprisingly he opted out of a 2nd ascent/descent of the same line straight after, which Paul and Jon were more than happy to take on and so before I could regret suggesting it, we were back on our way for a 2nd lap.

Splitting to the col de Gliere from Lac Cornu

On Friday the weather started to change and with Sean now keen and completely bitten by the Splitboarding bug, we headed over the back of Col de lac Cornu and found a superb fresh line down to the lake (which I has spied the day before), this was followed by a Split across the lake and up to the Col du la Gliere and again we found excellent untracked lines back towards Flegere arriving back just as the storm came in.

Great planning and timing on my part again?

All in all it was a great week and a fantastic start to my season here in Chamonix.

I’m about to go and start prepping 6 Splits for the coming weeks Slackcountry/Splitboard course.

I have a group of 6 regulars who are great fun to ride and have a laugh with and so I’m really looking forward to the week…It will be even better if this snow that is forecast comes our way!

On a final note…To compliment my Splitboard Tutorial video, skins on/skins off I have come up with a poorly edited Splitboard tutorial ‘how to kick turn a Splitboard’ video which you should watch and then practice at home.

Thats it for now, hope 2015 is going well and that you’re getting your shred on!

The season so far… keeping fit and riding hard!

Wow, the season is flying by! It’s been a while since I sat in the…