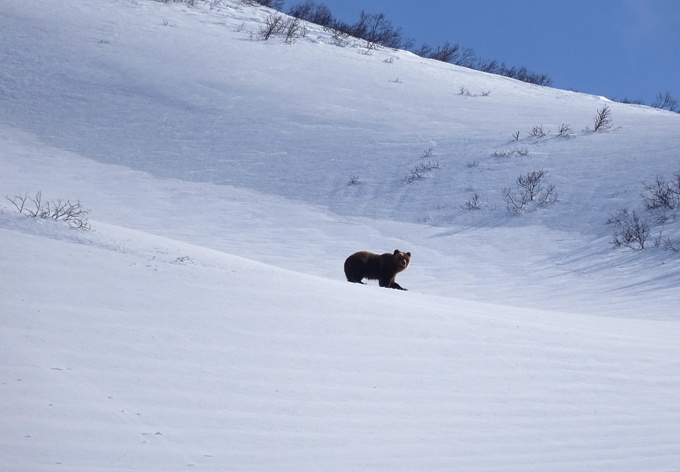 So my winter season 2015 has finally come to an end, although it has been snowing pretty constantly ever since the lifts closed and since I returned from Kamchatka…30C one day and snow the next?

So things are completely normal I guess

And so how was the season?

Well it started off pretty strange and with regards the weather, it kind of stayed that way!

Here’s how it happened…

A shallow early season snowpack played havoc with the deeper layer stability and so much of the early winter season was plagued by a persistent weak layer that pushed the Avalanche risk up all over the Alps.

I started my season in early December as usual with 2 weeks in Tignes, first Tech Clinic and first Split course of the winter.

Both courses went well, it snowed just in time for the Splitting which was great…I’ll put on a pre season Splitboard course again next winter for sure, its a great time to learn the intricate details and skills of splitting before the winter really hits.

January in Chamonix was not to bad, I had a couple of good early winter Splitboard courses, introduced a journalist to the Fine art of Splitboarding for an article for the Sunday Times and did some short but good tours keeping the focus more on the descents than the touring and keeping things safe whilst the Alps avalanched around us.

The weather and conditions in the Alps, Jan through to early Feb were generally pretty bad and as such the Alps were strangely quiet.

January brought lots of storm riding and low light days (which I actually love as there’s no one around and plenty of Pow) but luckily for us, we have the magic tunnel and conditions in Italy were generally pretty good again and so we spent a lot of time over there scoring day after day of epic steep pow around Courmayeur and up high on the South side of the Mont Blanc massif off the Helbronner…

I escaped on a quick 2 week Surf break and recharge to the Canaries over the Feb Holidays and returned super psyched to get back up in the mountains and get the shred back on.

The Snowpack was starting to stabilise around Chamonix and conditions peaked perfect for my first course back, the BC (Splitboard) Freeride course.

After a warm up shred day on the GM, we scored an amazing day out the Back of Le Tour with a perfect Alouette Couloir followed by a quick split up to the top of the Tornay’s Couloir, which drops some 800m straight down to Trient, powder all the way!

From the top of the Tornay’s I could see that the Glacier des Grandes was suddenly in perfect conditions and so booked the Heli, there and then, for a morning flight.

The next morning dawned perfect and with an early flight up to the Trient plateau and a quick Split over to the Aiguille du Tour, we then scored the first descent of the winter down Glacier des Grandes in possibly the best condition I’ve ever seen/ridden it in…A pretty epic week!

I followed this up with a great BC Voyager week shredding steep couloirs in Gressoney, the highlife being the Giachetti Couloir, possibly one the most beautiful and aesthetic lines I’ve ridden.

100kmh winds then stripped Chamonix bare again so I stayed focused on Italy and again found the goods up on the Helbronner and over in Courmayeur for a 3 day Split course on which we mainly focused on Freeriding the steeps again…Another great (but shorter) week!

I had 2 Steep and Deep courses coming up next and was really looking forward to them…I probably need to change the title to Steep or Deep as most of the time the 2 are incompatible and its rare to get both conditions at the same time!

From now on these will be known as the ‘Steeps courses’ as ‘Steeps’ is the aim of the game.

Having said they’re incompatible, the first ‘Steeps course’ brought us a pretty good mix of ‘Steep and Deep’ with some fresh snow and good access.

A lot of the big classics were out of condition and the weak layers were still posing problems in places but I had some lines I’d be looking at and wanted to ride.

With the persistent weak layers still evident, we kept it safe, dug lots of snow pits and scored a great line on the North Face of Mont Nix.

With a meter of snowfall reported further South we then got up early and headed to Gressoney for a day trip to score the Giachetti Couloir in perfect condition…1 meter of fresh and then headed back to Cham to finish the week with the super steep classic Glacier Marbree…another great week!

I split the 2 steeps courses with my Project X group, a group of regulars that are pretty much up for anything and so we go ride what ever is in conditions wether it be with solids or Splits…Sounds kind of like most of my courses actually…a very funny week and more great riding, the Helbronner in perfect condition and I rode my first (and only) Valley Blanche of the winter from the Midi…finished the week with some steeps on the North face of Crete de Youla which was fantastic…

The 2nd Steeps week was plagued by more ‘Powder’ and so basically became a ‘Deep Powder’ riding fest with some Steeps thrown in were possible…can’t really complain about that!

April came and I packed my bags and headed off to Norway to the Lyngen Alps for a Spiltboard trip.

The Lyngen Alps are a favourite location of mine, they are pretty magical and the terrain is fun. I had a great week there, scored some great riding, toured from the boat and rode a Steep North facing couloir that I’d wanted to ride after spotting it from a tour that we did on a previous trip…I love the Lyngen Alps!

I now quickly headed home, unpacked and stashed the Split kit and re packed with the big Freeride guns for 2 weeks of Heli Boarding in Kamchatka.

Kamchatka is another fav spot of mine and the focus of an article that I wrote for Whitelines Snowboard magazine earlier in the season.

It boasts quite simply, some of the greatest Freeride terrain on the planet…in my opinion…it helps that you have a Heli at your disposal and can basically fly and ride anywhere that you can get a drop off and pick up!

I filmed quite a bit this year in kamchatka, (after last year not even getting my camera out as I was having to much fun) and started a Video log or Vlog as I think it is known by those that seem to know?

So instead of writing about it here, I’m going to start posting my blogs and my Vlogs over the next few weeks. (If you’re interested then keep checking back here, on the mcnabs snowboarding FB page or my mcnab snowboarding you tube channel).

All in all it was a fun season! Hard work at times with the changing conditions but probably some of my best riding to date, so not so bad, can’t really complain about that!

I’m now starting to think about the schedule for next season…So many places to ride and so much riding that I want to do…the hardest thing is fitting it all in!

I’m going to try to get things online a little earlier this year so keep checking here and on the mcnab snowboarding FB page.

I’m also planning on filming my ‘middle aged Athlete/Alpine fitness Vlog series’ through out the summer, so keep in touch through the mcnab snowboarding youtube channel which you should have signed up for by now!

Right, I have mountain Guiding and Cycling work rapidly approaching and so need to get this aching body into action…

More shots from the BC Voyager Splitboard expedition to Greenland, showing the vastness of the…