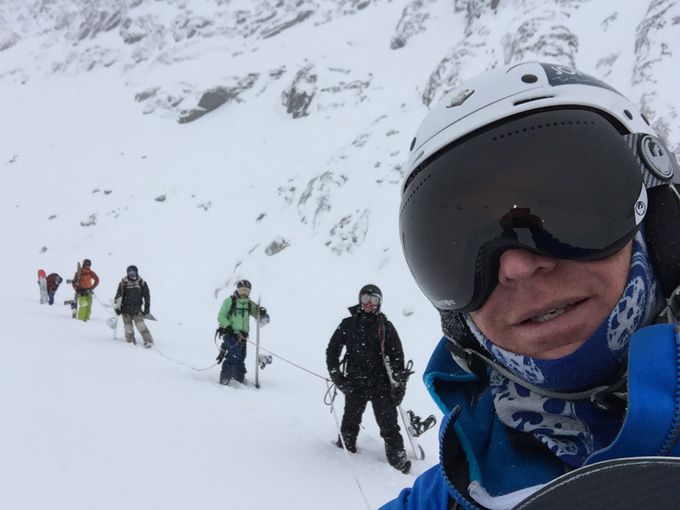 It’s amazing how quickly things change these days, I can never remember year by year how things transpired, but it feels like the seasons are changing day by day at the moment.

A couple of days ago Ruth walked the dogs down the valley in 17C sunshine, whilst at the same time, up on the Grand Montets we rode in storm conditions with gale force winds from the South West but great snow!

Last weeks course started out with Spring conditions and ended up with us deep in Mid Winter. A few days ago the garden here was back down to the grass, but is now deep in snow again…The birds that 2 days ago were starting to think about nest building are now looking confused again and who can blame them!

I’m about to run my first Off Piste clinic of the winter, its a course that some years books up quickly and some years fills last minute. With the poor conditions this year, this course was slow to fill and it was looking like a quiet week for me which would have been a shame as the conditions out there are now becoming all time epic for an Off Piste course and it would be a shame not to share the ride, but quite exciting as with a small group I get to really shred.

However, with about 24 hours to go its starting to fill up quickly, both with those looking to get over last minute and some of the local riders looking to explore a bit further afield.

The off Piste clinic is about exploring Off Piste technique and fitting your riding to the natural and changing terrain of the mountain. As usual, I adapt the course to the conditions and obviously, its not unheard of for me to introduce Splitboarding and Backcountry riding into the week if conditions and the group dynamics allow, as with all my courses!

It’s been a strange season so far, what with the weather conditions and the shallow snowpack.

There have already been some impressive avalanches around the Alps this winter and the bad layers that grew deep in the snowpack are easy forgotten as the snow on top begins to improve. In many cases the changing temps had settled the snowpack, but the strong winds that we’ve had the last week or so have once again created some interesting layers that are now getting buried again.

Vigilance is definitely going to be a key mindset in the coming days, weeks and even months!

Just the other day I dug a test pit to see how things are developing only to have it collapse on a week layer before I’d even managed to start a compression pressure test!

Yep, things are definitely interesting out there so be careful, carry and practice with your safety kit and read and take heed of the mountains signs as you see them and a lot of them are getting buried right now so you have to remember what you’ve seen before it snowed!

Last weeks course was a great. A real fun group of regulars, one of which, Michelle, we worked out had first been out with me on a course here in Chamonix way back in 1997.

We managed to get one day of Splitboarding in before the weather changed, scoring a nice powder descent before a pretty Icy split back up to a 2nd descent on the other side.

We then spent the rest of the week hunting fresh at the GM as things got deeper and deeper.

Eventually the winds dropped and the top opened to give us an epic last days riding on the Lognans Glacier.

and then roped up to hike up onto the Argentiere Glacier as at the moment the snow bridges over the crevasses are not very strong and I felt my foot going through a couple of times on the short hike we did.

Interestingly (or maybe scarily?) as always, there were a few other snowboarders riding out there with out harness’s and following and walking in our tracks.

The extra few minutes that it takes to get the rope out and tie in to make it safe are well worth it in my book!

Mid week, I received a nice package from Dragon Alliance, some of the new glasses and goggles. I’ve been wearing the new APX Transition goggle that changes colour to suit the light coditions…what a great idea, now I don’t need 2 lenses on changeable weather days.

Jones Snowboards seem to be getting popular, at one point this week we were all on them, then Jim jad to give his test board back and was back on the Yes which is photo bombing this Jones parade!

Ive been riding my new 168W Carbon Flagship, which is a pretty solid ship to ride. Hell stable at speed and super solid through the chop, check it out in this video from the last days ride!

As I finish this Blog I look out the window and the snow is still falling, Manon and her friend are outside Igloo building, the dogs are nearly buried and Winter is definitely back with vengeance…

A moment in time…a day in the life of a Splitboard Guide.

The angle eases and I increase my stride, pushing each ski forwards through the deep…

There are two common types of avalanche: the ‘looses now’ avalanche and the ‘slab’ avalanche.…

Another week Guiding in the Chamonix backcountry…

So things seemed to stabilise quite quickly last week after the big snowfalls. With a…