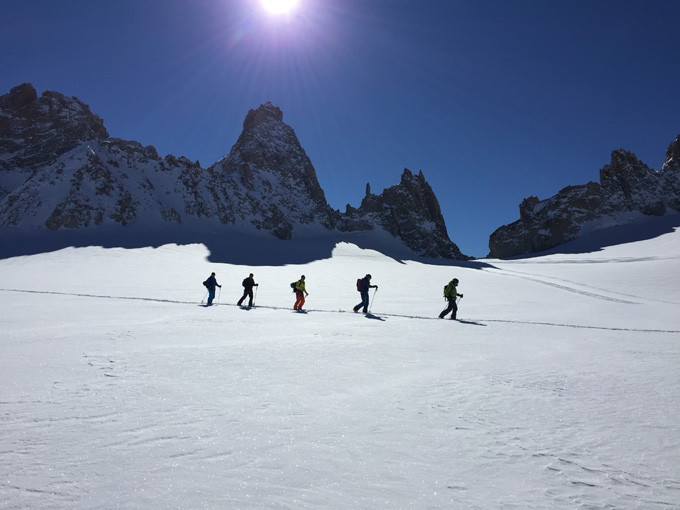 So we had some amazing conditions last week and definitely some of the best riding of the winter so far. The snowpack around Chamonix seemed surprisingly stable and things were getting tracked left right and centre, all aspects and gradients.

I had a quick wake up, for the legs, with a flat light storm riding day on the Grand Montets as my first day back on snow after my mid winter surf safari.

It took a couple of runs to get my lags back in, but after that things started to feel good, we had plenty of fresh snow and the week just got better and better.

On Tuesday, we had a great day riding the World Freeride Tour couloirs and the Val Veni in Courmayeur in very deep snow.

The weather then cleared for a perfect Intro to Splitboarding day, which saw us score fresh lines in the steep Alouette and Tornays Couloirs. The Tornays Couloir hadn’t been ridden so we scored a perfect 800m powder chute all the way down to Trient…which was nice!

Whilst standing at the top of the Tornays, about to drop in we had a great view over to the amazing slopes of Glacier des Grandes. Seeing it looked to be in perfect condition, I suggested a Heli Split day to the guys for the following day, which they obviously went for and so I made the Heli booking right there and then. We then rode the couloir and made plans for the big day ahead.

We flew a 9:30 commute up to the Trient plateau and broke trail across to the Aiguile du Tour on the Splits in super deep snow. The descent was nothing short of perfect and whilst it took me a little while to get confident with the snowpack, I don’t think I’ve ever seem the Grandes in better condition!

Check out the day on the video…

Friday was another white out day on the GM with good snow but poor visibility.

All in all a great week!

I’m now packing the van for my BC Voyager trip to Gressoney where conditions also look pretty good!

I saw an interesting study on Avalanches recently that maybe changes some of the preconceived ideas about the most common shapes of slopes prone to a big Slab slide.

In studies of Avalanche activity in the year 2000 and then again in 2010, it has been found that out of recorded Avalanches, most Slab Avalanches released on Concave slopes.

This goes against previous conceptions that concave slopes were considered to be safer due to the support offered to the steep part of the slope by the easier angled terrain below.

In actual fact, the increased pressure made by the steeper slope is often too great for the easier angled slope to support.

The added pressure of a freerider can easily release the steeper section either from above breaking the fragile support offered by the easier angled slope below.

The second most common slope shape for slab releases were slopes of steep but even gradient bowled with ridge lines either side, closely followed by featureless wide open slopes of even gradient.

Convex slopes, often thought of as being the most prone slopes for a slide due to the pull of the steepening snowpack, came out in the low risk category.

I’m not sure if the convex slope activity was lower due to the fact that most riders tend to avoid slopes of this nature due to the perceived risk or not, but interestingly many of the avalanches studied were natural releases or remote trigger released slides.

This agrees with most of the photos of slides that I have seen this season, which have mostly been on concave slopes, featureless slopes or slopes that resemble bowl type shapes. I don’t actually think I have seen any Avalanche activity on a convex slope this winter.

It has always been the rule of thumb that the pressures exerted on a convex slopes with the steepening gradient have made these slopes more Avalanche prone than Concave slopes were the lesser angled easing concave slope might offer some kind of support to the steeper slope above.

interestingly, most Backcountry riders avoid convex slopes due to the understanding given above and aim for concave slopes that are perceived as being safer?

The studies also show that whilst people are getting more educated in Avalanche awareness, avalanche statistics are rising rapidly.

Some of this is obviously due to the increased traffic in the Backcountry these days.

Some of it is due to the development of equipment and skills, meaning people are getting out there and tackling steeper and deeper parts of the mountain quicker and due to the race for fresh lines, sooner after a snowfall.

One other interesting point made in the report was about the pressures exerted on the snowpack.

If you push on a firm layer of wind lab for example, the pressure you exert will propogate outwards from were you push, affecting a larger area of the slope. If this exerted pressure is enough to fracture the bonds holding the slab in place then it will slide en-mass.

If you push on powder snow however, the pressure you exert will travel downwards going deeper but over a smaller area and not affect a large area of the slope.

What is interesting about the new study is that many of the larger deeper slab Avalanches recorded occurred in powder snow conditions due to the fact that the pressures exerted travelled deep into the snowpack and affected consistent weak layers hidden deep down near the ground.

These same layers weren’t affected when the snowpack above them was firmer as the pressures exerted on the firmer snowpack propagated outwards and so didn’t travel as deep.

The point of deep pressure exerted over a small area through soft powder is enough to start a large deep layer collapse that then quickly propagates over a large area. Studies have shown that when a fragile layer collapses it more often than not starts at one single point and shears outwards in all directions.

Whilst hiking across the Flat and pretty featureless Trient Plateau on Thursday, we had a large Whumping sound propagate out from where we were over a massive area as a weak layer collapsed underfoot. Fortunately, the terrain there is so flat there was no danger. It was interesting to hear how it spread out into different areas and how far the propagation went. It made me super cautious for the descent, but the conditions on the Grandes were completely different.

Anyway, to conclude, from what I can gather…

Riding on a firmer strongly bonded snowpack increases the risk of a large shallower slab release, consistent with freshly transported windblown snow not bonding to a recently buried surface layer.

Concave slopes are risky when ridden from above as the concave part of the slope is prone to collapse and release the steeper slope above.

Concave slopes are risky when ridden or traversed on to from below as this might break the weak support that the easing angle offers to the steeper slope above.

Steep even gradient slopes seem to be at risk due to their featureless nature with nothing offering support to the snowpack.

Bowl shaped slopes, concave or even gradient in shape but with ridges either side are at greater risk due to the fact that the pressures are concentrated towards the centre of the bowl, the support is easily broken and the slide is funnelled.

Convex slopes, which, maybe from this study are now perceived as being the safer option, are still at risk due to the nature of wind loading over a rounded ridge travelling further into the steepening slope…most convex slopes fall into the concave category once you clear the convexity anyway?

So…as you can see, there is no easy solution when it comes to assessing risk…This latest study only increases the spectrum of slopes that are high risk.

I always work on the premise that risk is always present and try to assess every situation as it presents itself.

I think these new findings will serve to make me more cautious when assessing terrain shape and help me understand how the pressures that I exert affect the terrain and the snowpack around me.

Anyway, I hope this helps some of you make the right decisions in your time of Need…

Right I’m off to Gressnoney.