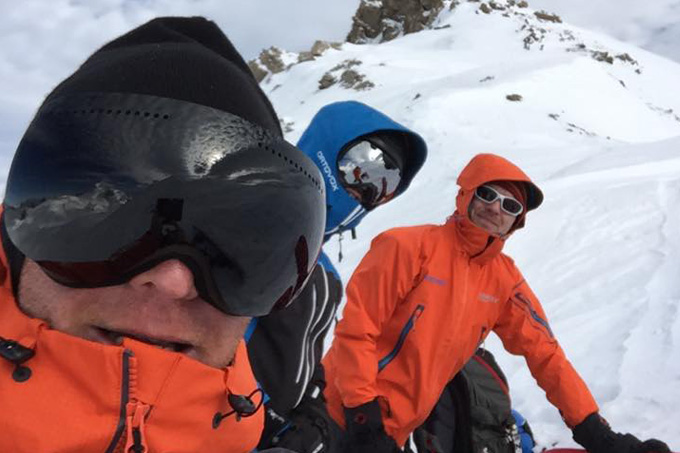 Well I’m now back in Chamonix after 2 great week of pre season shredding in Tignes.

The first week, my annual pre season Tech clinic, went very well even the the conditions were less than perfect.

Fortunately, or maybe through amazing planning on my part, the Tech clinic, being a ‘Piste’ bound course, wasn’t greatly affected by the lack of snow as the pistes in Tignes were in great condition if not a little firm.

Of course the firm conditions make for a harder learning curve but a better end product as you have to be on your game and create the carve every turn and nothing is for free and the team worked hard and made amazing progress.

There was still plenty of snow to play around in at the sides of the pistes and this was topped up by regular snow flurries.

The Tech clinic is a great way to start the season as it gets you working through your feet, moving pressure and bending the board to ride by design rather than force. For me it gets me thinking and feeling my ride through the micro movements that make everything happen and make the ride powerful and flowing. I rode the Flagship 168W and the Carbon Flagship 162W, both of which handled the icy slopes with ease!

I went home for the weekend to Chamonix after week one and returned on Sunday evening to Tignes with my new Karakoram Prime bindings, which I’d spent the weekend customizing to my personal specs, adding a toe raiser, tighter straps and my own highback modification with extra forward lean. The Solution 168W would be my ride complete with McNab anti V power plate and Power bar, for the start of my 2nd course of the winter, the Slackcountry Splitboard course.

Conditions obviously weren’t amazing for Off Piste riding, but with the access of the splitboard I figured we would be able to get out amongst it and find the goods.

Over the weekend the people that make Tignes tick had blown loads of snow and opened the pistes from le Lac over to the Olympique liaison to Val d’Isere. This opened up quite a bit of riding terrain that we hadn’t been able to access during the Tech clinic and so on the first day we headed over to check things out. I spotted a couple of Splitboardable descents and stored them in the memory banks for later and we also hiked up a ridge and rode a pretty nice big powder face back down towards Val Claret…a good first day!

I’d heard through the Guides grapevine that Le Fornet was holding good snow and so on the 2nd day we rode over to the far side of Val d’Isere for an explore. Unfortunately the clouds moved in and conditions were white out for most of the day but as we approached the top lifts at Le Fornet things started to lift. The snow up there was indeed better but flat light kept us on the pistes but I made another mental note that this would be a good spot to Split if the conditions allowed.

The next days forecast was for snow from midday. I woke early to clear skies and we jumped in the van and drove straight around through Val to the Le Fornet Telepherique and headed up high with the Splits. By driving around we had no stress about trying to get back to Tignes and so had a full day to play.

We took a couple of runs to dial in the split kit and then headed off the top lift straight away scoring a nice untracked powder descent with good vis. We changed over to split mode and started hiking as the skies clouded in and the snow began to fall. The light went flat and the 2nd descent which should have been amazing became quite tricky but was still fun. We stopped for lunch in the middle of nowhere as the storm came in and the snow began to fall thick and fast and then hiked out of the BC back to the lifts and headed for home with fresh snow falling and the prospect of a bit of a powder shred in the morning.

Thursday we woke to about 20 to 30cm of fresh and got busy tracking it out as best we could. We rode some steep lines through the cliff bands up towards the Grand Motte and took an Off Piste shred down the Genepi valley. Strong winds kept the top cable car shut but we had a great off piste day and I also kept an eye out for Splitting options for the last day.

Friday we woke to clear skies and no wind so we grabbed the splits and set out for a bit of a split mission. I had a couple of options logged and so we headed the Motte to check out option 1. Unfortunately the pisteurs in Tignes had got up late and were still blasting the mountain to bits and so access from the top of the Motte was a no go. Spying a great new possibility we headed out of bounds and started hiking with the splits.

Conditions were a little tricky with tightly bonded windslab in evidence on all lee slopes, obviously this is why they were so reluctant to open the top. The snow that had fallen the day before had come in with strong winds and mild temps which had created a dense slab sitting on top of the old temp affected re frozen surface layer. This refrozen layer, not very thick was lying above a shallow snowpack consisting of about 30 to 50 cm of temperature gradient crystals or depth hoar. As such, with such a fragile base there were plenty of unnerving whumping noises as the snowpack around us settled. (This might cause complications later in the season once it become buried under a deeper heavier snow pack!)

Kev hikes the skyline
Fortunately or again by good planning, during this phase of the tour we were on rolling supported terrain of no more than 15 to 20 degrees in gradient with no danger from above and so although it was unnerving it posed little threat to our progress.

Matt in the rolling pre climb terrain where the snowpack settled constantly!

With this info stored however I had already began to plan my route up the steeper slopes to come and now as we approached the mountains base 1 hour into the tour, I headed for a more wind scoured line of attack rather than an easier but steeper line with better snow cover, thus avoiding any loaded slopes.

Matt beaks trail up the steeps.
We headed up for about an hour and arrived with out incident on the windy cold ridge above where we changed back to shred mode. From here we had 2 options, the slopes on the other side or a return back the way we had come. I by passed the cornice and gained a good vantage point to check out the other side. being a lee slope I straight away scanned the terrain for safe options, supported terrain with out the threat of windslab. It looked good, but I wasn’t sure where we’d end up and so grabbed the map and checked out a route back to civilisation. It looked doable and the snow definitely looked better on that side, the terrain looked good, the snow pack supported and not to wind affected once we’d clear the Col.

One at a time we dropped in and rode to a safe spot giving us a great view of the slopes below. It looked amazing and just as we were about to drop in the sun came back and glory was for all.

With it being early in the season and with feeling relaxed and happy to be out touring, I let the guys grab first tracks before dropping in myself for my first decent BC run of the season.

And so ended my first two successful courses of the winter, Nice!

I now have a couple of weeks off for family time and to make plans for the coming courses. Hopefully the snow will come to us…but if it doesn’t then we’ll definitely go to it. It’s up there somewhere and the Splits will give us the access we need if the lifts won’t suffice.

For the moment, I’m back on the running, squats and leg pressing regime until it snows or I get the urge to hike and ride…for the however, moment more leg power is king!

All is good in Chamonix!

The morning after the storm!

The morning after the storm! I love this photo which shows Alastair and Mark's tent…